This month we take a look at SkyAirWorld - an airline that only very briefly graced the skies of Central Queensland, operating closed fly-in fly-out charters to Emerald Airport during 2008.  SkyAirWorld was a scheduled and charter airline based in Brisbane.  It provided a range of services including charter work for the Australian military, minerals and resource sectors, and also provided wet-leases for other carriers, particularly airlines in the South Pacific.

SkyAirWorld registered its first aircraft, a leased second-hand Embraer E-170-100LR VH-SWO in early March 2007.  VH-SWO was promptly repainted in Solomon Airlines colours after an agreement was reached between the two airlines that SkyAirWorld would operate on behalf of Solomon's.  The aircraft eventually commenced operations between Brisbane and Honiara and Honiara and Nadi in mid-May 2007. 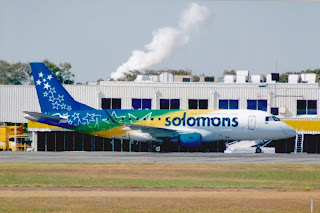 However, this relationship proved to be short-lived, with services being suspended in August 2007.  Since the termination of the agreement with Solomon Airlines, SkyAirWorld initially limited itself to charter services for the Australian Defence Force (ADF) and for operators in the resource and mineral sector in Queensland.  E-170 VH-SWO was subsequently partially repainted to remove the Solomon's titles.

SkyAirWorld commenced closed fly-in fly-out (FIFO) charter flights between Brisbane and Emerald initially utilising their E-170 VH-SWO.  VH-SWO was spotted on the ground at Emerald on 16 June 2008 shortly after arriving from Brisbane as “SkyAir 201”. 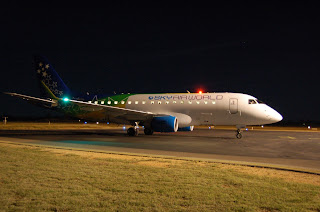 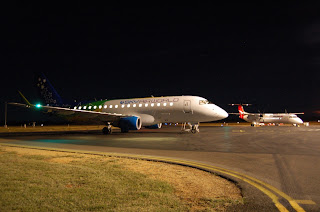 Later, SkyAirWorld took delivery of, and then utilised one of their two Embraer E-145MP aircraft – VH-SZF and VH-SZH – on the flights between Emerald to Brisbane.  VH-SZF was photographed at Emerald Airport on 8 September 2008. 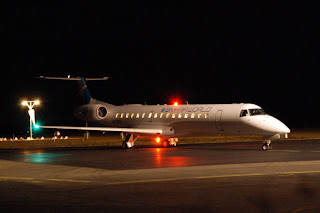 Following the delivery of their first of two Embraer E-190-100LR aircraft (registered VH-SXK and VH-SXO), the airline re-entered the field of scheduled services, operating on behalf of Air Niugini on services to and from Sydney. It then commenced operating on its own between Brisbane and Honiara, and following regulatory approval in late July 2008, launched services between Brisbane and Cairns via Cloncurry in August 2008, flying three times a week.  It had also planned to commence to start scheduled services from Perth to the Cocos Islands in the Indian Ocean. 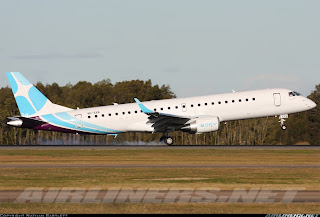 In  January 2008, SkyAirWorld announced that it would enter a joint venture with Indonesian airline Lion Air (to be called Lion Air Australia), to enable Lion Air to enter the Australian domestic airline market, and to serve routes between Australia and Indonesia. Australian media outlets reported that Lion Air was taking a 49% interest in SkyAirWorld under the joint venture.

In November 2008, SkyAirWorld was reported as signing an agreement to establish the flag carrier airline of East Timor. The airline, to be called Timor Air, would use a SkyAirWorld Embraer 190 for services from Dili to Darwin and Bali.  Operations were planned to commence in February 2009. At the same time the partnership with Timor Air was announced, SkyAirWorld also announced plans for the airline to fly twice-weekly domestic services from Brisbane to Darwin via Cloncurry.

However, in February 2009, SkyAirWorld was in trouble and grounded three of its Embraer aircraft and sacked 40 out of its 140-strong workforce.  The airline eventually temporarily suspended its operations on 22 February 2009 after the airline cited that it would be restructuring its business. However in March 2009, the airline had all of its Embraer aircraft repossessed by GE Commercial Aviation Services (GECAS), with the airline, which owed more than $40 million to creditors, placed under voluntary administration.

SkyAirWorld was sadly missed.  FIFO charters to Emerald didn't resume for some time after SkyAirWorld's demise.

In closing this Historic Spot, here is one of my favourite YouTube videos, featuring some spectacular air-to-air action with one of SkyAirWorld's E-190 aircraft.