Rockhampton plane spotter 'IAD' ventured to Rockhampton Airport during his lunch break on Friday 15 March, and aside from the usual commercial visitors, he spotted Toll Freight Aviation Metro III VH-UZW parked on the southern end of the apron. 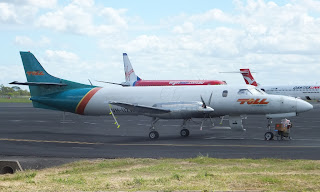 The Metro seemed to have broken down, after arriving earlier in the morning from Brisbane as TFX106.  It was scheduled to depart to Townsville.

It appears that VH-UZW eventually departed back to Brisbane late on Friday afternoon as TFX704.

Incidentally, Toll usually operates other Metro freighters into Rockhampton each week morning - these all arrived from Brisbane and depart to either Mackay, Townsville, or Cairns.

On Friday 15 March, Toll also operated Cessna 208 Caravan VH-TLH into Rockhampton and then Mackay again as TFX669. This flight was a repeat of Thursdays flight under the same flight number.