Michael F has reported that during the afternoon of Saturday 2 March, a pair of QantasLink aircraft were unable to land at Gladstone Airport due to the return of yet more very wet weather to hit Central Queensland.  Cobham Aviation-operated Boeing 717-200 VH-NXO - flying as QJE1714 - diverted back to Brisbane, while Dash-8-Q400 VH-QOT - flying as QLK2336 - diverted to Rockhampton.

I'm sure there were other diversions from Central Queensland Airports that at this stage I'm not aware of.

Meanwhile, Michael F ventured to Gladstone Airport during a break in the weather on Sunday 3 March and captured some lovely images of some of the afternoon's action.  QantasLink Dash-8-Q400 VH-QOB was caught at the moment of touch down on Gladstone’s Runway 10.

Michael also captured a dramatic image of Jabiru J-230 24-7347 touching down on Gladstone's Runway 10 as it contended with some strong crosswinds!

A lovely helicopter visitor to Gladstone Airport that was spotted by Michael on Sunday was Aerospatiale AS.365N2 Dauphin VH-NAR which is operated by McDermott Aviation.

Meanwhile spotted by Jamie C at Gladstone Airport last week was KJM Contractors' Raytheon B200 King Air VH-KMS which popped in on Thursday 28 February from Brisbane. 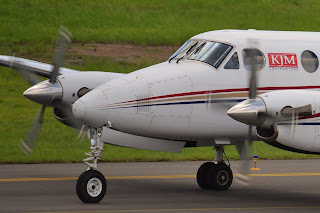