With one of the world’s biggest and best rock and roll music bands, KISS, performing in Mackay this weekend, it is possible that Mackay Airport will play host to a few extra visitors over the next few days.

Later in the morning of Thursday 14 March, Ramsay Air Charter Dassault Falcon 2000EX VH-RAM arrived at Mackay Airport from Sydney.  It departed back to Sydney mid-afternoon.

On Wednesday 13 March, Raytheon 390 Premier I bizjet N7088S - which seems to have taken up residence at Mackay Airport - operated a return flight from Mackay to Brisbane.

Lastly, as we posted below, Wednesday 13 March was quite a busy day at Mackay Airport for bizjet movements with the two Singapore Flying College Cessna 510 Citation Mustangs - VH-VSQ and VH-SQJ - touching down from the Sunshine Coast and Rockhampton (where VH-VSQ is pictured below by 'IAD'). 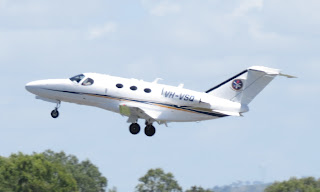 Stay tuned to the CQ Plane Spotting Blog via our Facebook and Twitter feeds for all the up-to-date information!
Posted by Damian F at 10:45 PM