Qantas and Emirates Partnership A380 Flyover Photos From Sydney


On Sunday 31 March, Qantas marked the official launch of its partnership with Emirates with a spectacular flyover of two A380s - one from each airline - over Sydney Harbour. 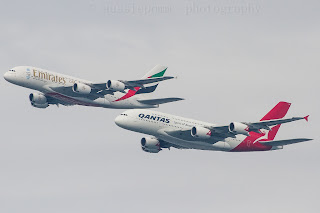 The two jets flew 1500 feet apart over Sydney Harbour, the Opera House and The Sydney Harbour Bridge.  It's believed to be the first time two A380s have flown in such a formation anywhere in the world. 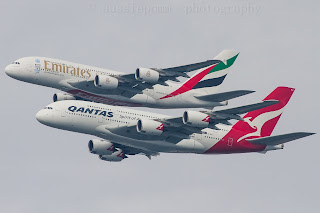 Sydney plane spotter Bernie P (aka 'AussiePomm') captured the truly spectacular images seen in this Blog post. He posted these and more superb images from Sunday morning on his personal Flickr Photostream (http://www.flickr.com/photos/berniep/).

The Qantas and Emirates deal, described by Qantas CEO Alan Joyce as a "seismic shift in global aviation", means flights from Australia to Europe will now stop-over in Dubai.

Qantas flights from Australia will no longer stop-over in Singapore as they did during Qantas's partnership with British Airways, which has come to an end after 18 years.

What an exciting day!  My sincere thanks to Bernie P for allowing me to share his truly spectacular photos!  They are some of the best captures of aircraft that I have ever seen!  I love 'em!!