Information sourced from: The Courier-Mail

On Thursday 14 March, Brisbane Airport's cross Runway 14/32 was re-opened to help ease the growing pressure on the Airport's main Runway 01/19.  The smaller cross-runway has been out of action for around six months, adding to the congestion which has given Brisbane Airport one of the country's worst records for on-time flights.  It had been scheduled to re-open last month but the timing was delayed by poor weather over the summer. 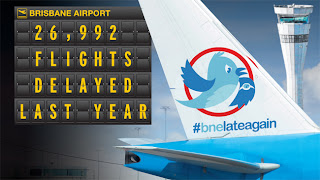 Moreover, the flight delays at Brisbane Airport, and the Airport's failure to control flight congestion, is threatening Brisbane's place as a hub for fly-in fly-out (FIFO) workers.

Mining companies are seeking alternative FIFO bases as persistent flight delays damage productivity and push up costs, according to the operators of charter flights to the state's mining hubs.

Air charter firm AVMIN, which specialises in the mining and resources sector, has stated that the continuing delays at Brisbane Airport are resulting in a number of clients requesting their charter flights depart much earlier in order to avoid the costs associated with staff missing connecting flights and or providing last-minute overnight accommodation.

They have also seen an increase in requests for charters to depart from alternative airports including the Sunshine Coast, Archerfield and more regional ports such as the Whitsundays and Townsville.

Australia's largest FIFO charter operator, Alliance Airlines, says it is reluctant to invest one more cent at Brisbane Airport until the operators commit to completing the new parallel runway.  However, Brisbane Airport Corporation says it will not proceed unless airlines back down on their refusal to fund a quarter of the $1.3 billion cost through extra per-passenger charges over the eight-year construction period.

Management at Brisbane’s other General Aviation and Charter Airport at Archerfield are also looking at expanding operations into resources areas.

Meanwhile, the Brisbane Airport Corporation (BAC) has scrapped plans for a dedicated fly-in fly-out (FIFO) terminal for resource charter flights. BAC claims that the since discussions commenced on the viability of a FIFO terminal, the FIFO market has changed and much of the FIFO market is using QantasLink and Virgin Australia scheduled services.  So, a facility dedicated to FIFO operations is no longer a viable option. BAC may look into a possibility of developing general charter flight facility at Brisbane Airport.
Posted by Damian F at 7:27 AM