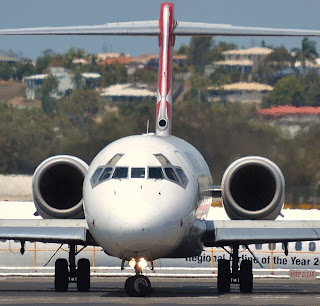 A special post from Jamie C - who spent a good few months collating all the photos he had of the various jet aircraft to touch down at Gladstone Airport over the last year.

The first scheduled jet service to land at Gladstone Airport touched down exactly one year ago - on Thursday 15 March 2012 - when QantasLink (Cobham Aviation) Boeing B717-200 VH-NXN arrived at Gladstone from Brisbane as QLK1712.

Since then, QantasLink jet services have gone from one return flight from and to Brisbane per day, to as many five return flights most weekdays, on top of continuing Dash-8 flights up and down the Queensland coast.

Virgin Australia usually flys Skywest Airlines-operated ATR 72 aircraft into Gladstone Airport on scheduled services from Brisbane.  On the odd occasion, Virgin have substituted a larger Embraer E-190 jet on some - mostly weekday - services.  The first Virgin jet to touch down at Gladstone was VH-ZPN, which touched down as VOZ1711 from Brisbane on Tuesday 12 June 2012.

As shown in Jamie's fantastic photos, VH-ZPN actually wears the livery of Pacific Blue - Virgin's New Zealand-based off-shoot airline that flys services from Australia to destinations throughout the Pacific.  Later in June 2012, E-190 VH-ZPD touched down at Gladstone in Virgin Blue colours, and eventually in late July 2012, VH-ZPQ was the first E-190 to touch down at Gladstone wearing the new colours of Virgin Australia.

My sincere thanks to Jamie C for his very hard work in helping me compiling this Blog Post.  Jamie works hard to produce some truly fantastic photographs at Gladstone Airport.  His efforts are really appreciated!  Thanks mate!