It time to celebrate for the Callide Dawson Flying Group who have recently announced that they have approval to temporarily settle into an area at Biloela / Thangool Airport that the Banana Shire Council has allocated to them for use as a home base. 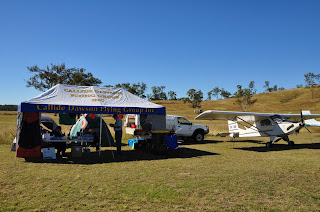 Currently, the club has the use of the old Council maintenance shed and its surrounding area at the airport, and once the Council has sorted the boundaries and completed all other necessary steps, they will be advised of the permanent area they will allocate to the Club.

The current location is to the right of the airport parking area and directly behind the Thangool State School. Access for vehicles is through the Airport car park. Aircraft will be able to park right up to the fence just a few metres from the clubhouse and there is a gate for easy access.

As well as the use of the old maintenance shed the Club has also been given a 40ft donga that council has given permission for them to re-locate onto the allocated area right beside the shed.

The first of several planned working bees (followed by the customary BBQ or sausage sizzle) will be held this coming Saturday 22 and Sunday 23 February, in order to get the clubhouse ‘ship shape’.  The Club is also looking at signage options and would welcome contact from anyone who may be able to assist in this field.

That first ever meeting was held at the Jambin Hotel on 17 June 1989.

Thanks to Dave and Liz See from the Club for their help with the information contained in this post!