More people than ever are flying to the Bundaberg region, according to the latest airport figures released last week by Bundaberg Regional Council.  QantasLink and Virgin Australia carried 152,127 passengers between Bundaberg and Brisbane airports last calendar year, setting a new record for the region.  It represents a 17.4% increase compared to the 2012 figures.


Council are very pleased to see such positive results less than a year after Virgin Australia was approved to operate flights alongside Qantas to and from Bundaberg Regional Airport.


Meanwhile, speculation is growing that a new airline carrier could be headed to Bundaberg.  Council has stated that they would "absolutely" welcome a third carrier to Bundaberg, and have confirmed they've been in talks with JetGo Australia.

JetGo describes itself as "a new provider of Air Charter and Fly-In Fly-Out (FIFO) services for Australian Industry".  It currently operates a fleet of three Embraer E-135LR regional jets on FIFO and other charter flights mostly in Queensland.

Council hopes that if JetGo was secured for the region, it might consider a Sydney run from Bundaberg Airport.

A direct link to Sydney would be a great win for Bundy travellers after the local News Mail newspaper found last year that local travellers could save as much as $500 per ticket by flying from Hervey Bay (Fraser Coast Airport) to Sydney rather than from Bundaberg.  The Fraser Coast Airport - as profiled by us HERE - is around a one-and-a-half hour drive from Bundy. 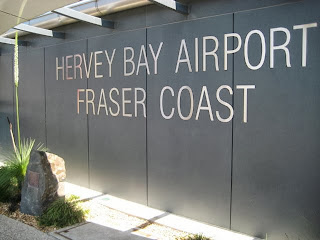 An official announcement is expected in the first half of this year.

Finally, to ensure a visit to the Bundaberg region isn't ruined by a missed flight, Bundaberg Regional Council is installing new signage to help tourists to arrive at the airport on time and via the most reliable route.  Council has reportedly obtained in-principle approval from the Department of Transport and Main Roads for the installation of the signage along the Ring Road.