From late last month, there have been some significant changes to Mackay airspace with the associated Control Area Steps now active 24-hours-a-day, and the introduction of "Mackay Approach" on 125.65. 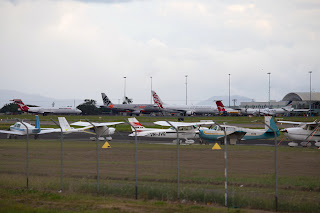 During Mackay Tower coverage hours, air traffic control will continue to be provided by the Tower below 4500ft in the Class D airspace surrounding Mackay.

Outside of Tower hours, the Class D airspace will become Class E airspace above 700ft and Class G airspace/CTAF at and below 700ft.

An approach control service at Mackay has also commenced and is provided by Brisbane Centre and is being referred to as "Mackay Approach".  Mackay Approach will operate on 125.65 and will also provide an air traffic control service in the Class C airspace surrounding Rockhampton at 8500ft and below.

Additionally, according to AirServices Australia AIP SUP H01/14, a clearance will also now be required before aircraft enter the runway when on the ground at Mackay Airport.
Posted by Damian F at 9:52 PM