In this Historic Spot we take a long back at Kendell Airlines, and specifically the brief time in which they flew Canadair CL-600-2B19 - CRJ-200ER - regional jets into Central Queensland on behalf on Ansett. 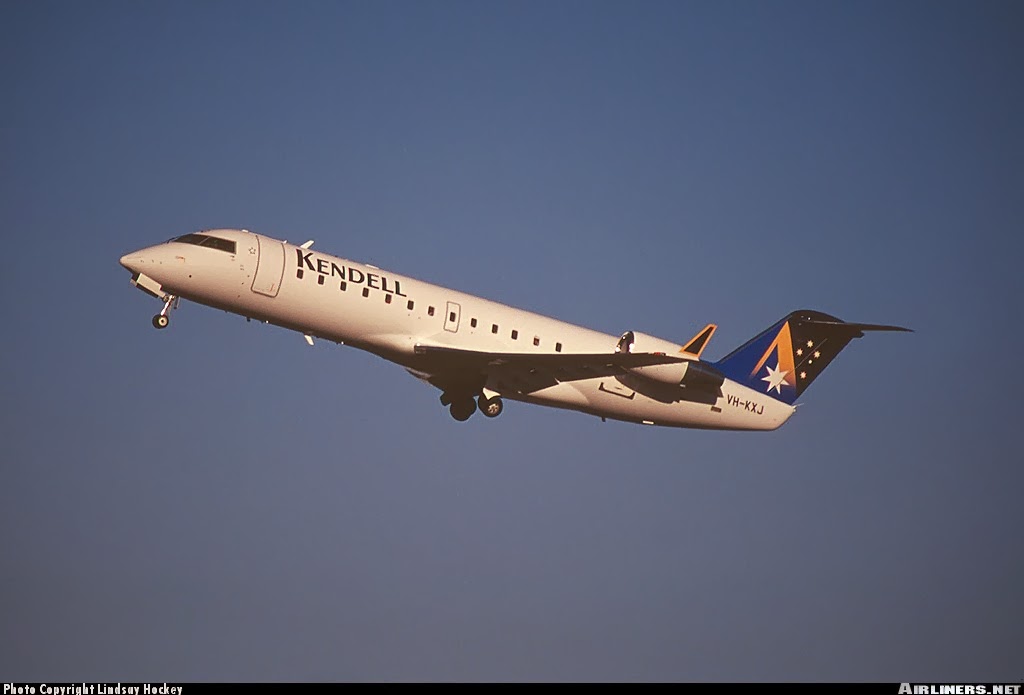 Kendell Airlines was one of the biggest regional airlines in Australia and was at times, the largest in the country. It served major regional centres mostly in New South Wales, Victoria, South Australia and Tasmania from the state capitals, but also operated Regional Jet services into Central Queensland.  Many of its services were in co-operation with its parent company Ansett Australia during the 1990s.

The airline was founded in 1967 as Premiair Aviation by aviation enthusiast Don Kendell and partners, originally serving as an air charter provider and flying school, based in Wagga Wagga in New South Wales.  In 1971, the airline launched scheduled services using Piper PA-31 Navajo aircraft between Wagga Wagga and Melbourne.  PA-31 VH-CLU is shown below at Wagga Wagga in July 1977. 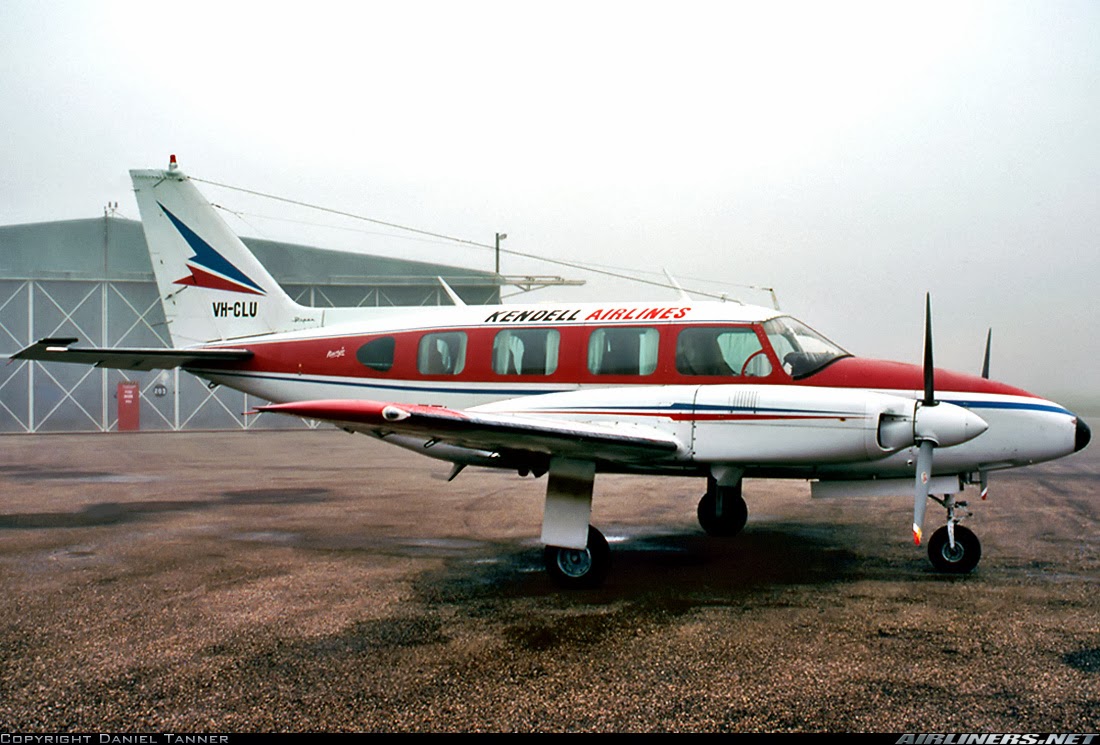 Shortly afterwards, the route network was expanded with flights to Sydney and Canberra.  Flight operations saw a further increase during the 1970s when de Havilland Heron and Swearingen Metro II aircraft were added to the fleet.

In 1983, the airline's name was changed to Kendell Airlines.

In early 1985, the airline introduced the 34-seat SAAB 340, a more modern regional airliner.  Kendell was in fact the first airline in the Southern Hemisphere to operate the SAAB 340, with further aircraft of that type being added over the following years. SAAB 340A VH-EKD is pictured below at Adelaide in April 1993 - and VH-EKD continues to fly in Australia (and Central Queensland) as a freighter for Pel Air (Regional Express - better known as REX). 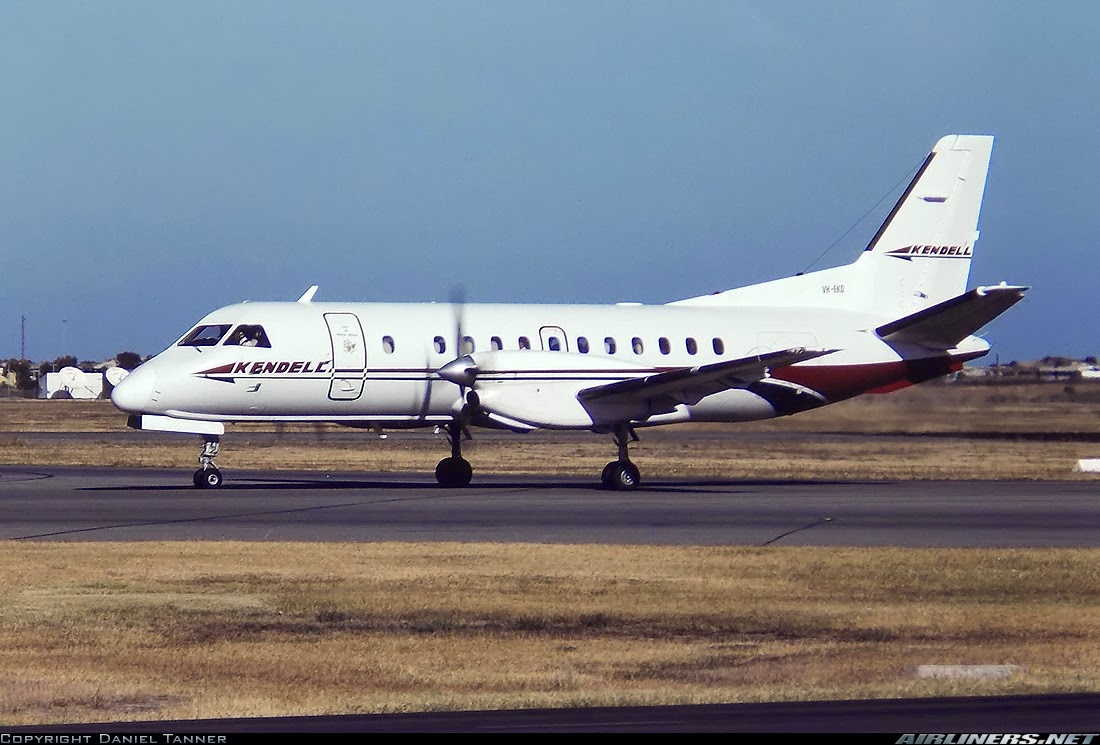 During the mid-to-late 1980s, the route network was nearly doubled as a consequence of the deregulation of the Australian airline market. During the 1990s, Kendell established further operating bases to add to its original one at Wagga Wagga Airport, namely at Devonport Airport, Albury Airport and Sydney Airport, largely as a result of the airline becoming a subsidiary of Ansett.

From early 1996, Kendell Airlines offered a high-frequency (up to 13 daily return flights) service between Sydney and Canberra – on behalf of Ansett, which was followed by scheduled flights to Coffs Harbour and Ballina, which also had previously been operated by Ansett. The SAAB 340s that were acquired by Kendell Airlines during that period were painted in Ansett colours - as shown on VH-EKD at Melbourne Airport in December 1999. In 1999, Kendell became a regional affiliate of the Star Alliance, of which Ansett Australia had become a member. 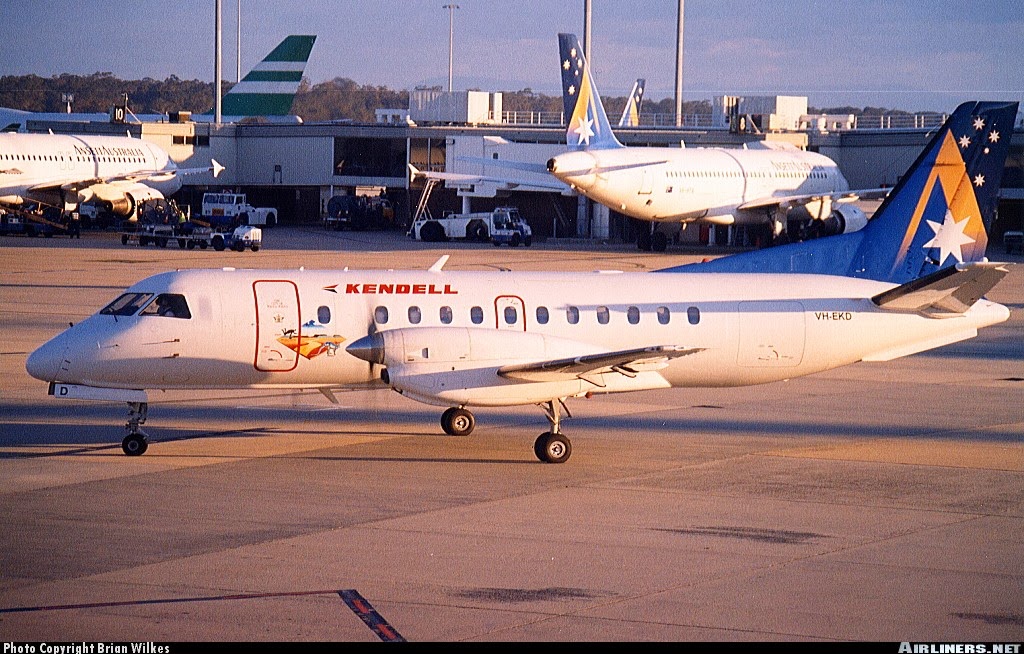 In the late 1990s and early 2000s, Kendell Airlines took delivery of 18 Canadair CL-600-2B19 CRJ-200ER regional jet aircraft.  The first jet aircraft to be operated by the airline. 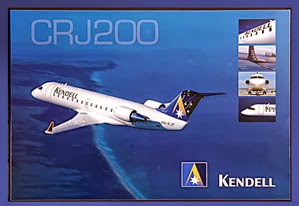 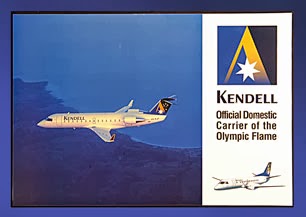 One of the last CRJ-200s to be delivered VH-KJY was open for inspection at the Sunshine Coast Airport in March 2001. 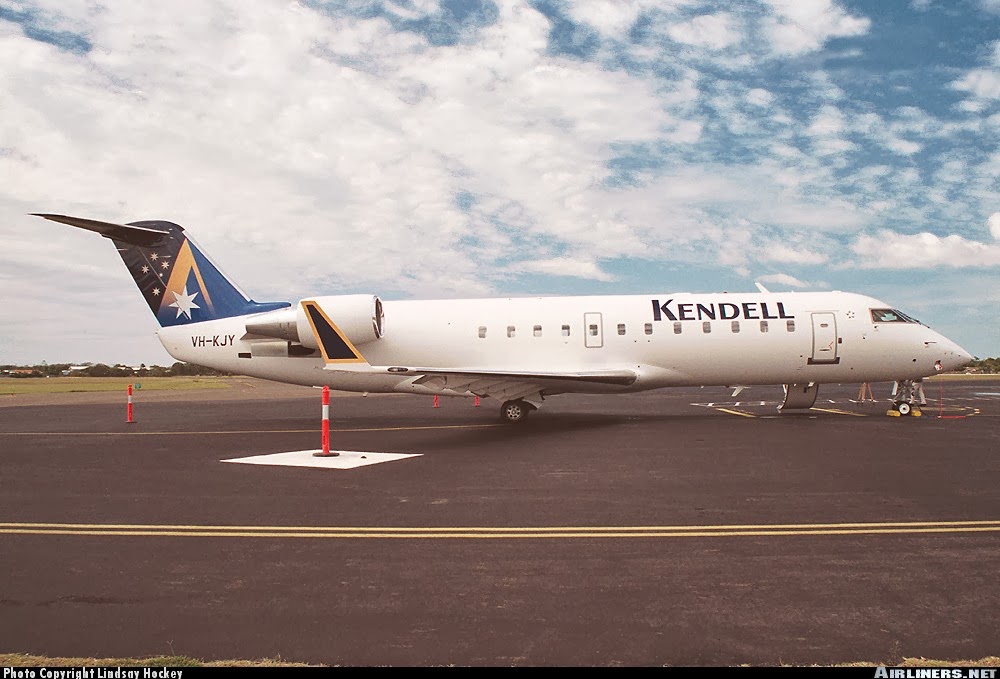 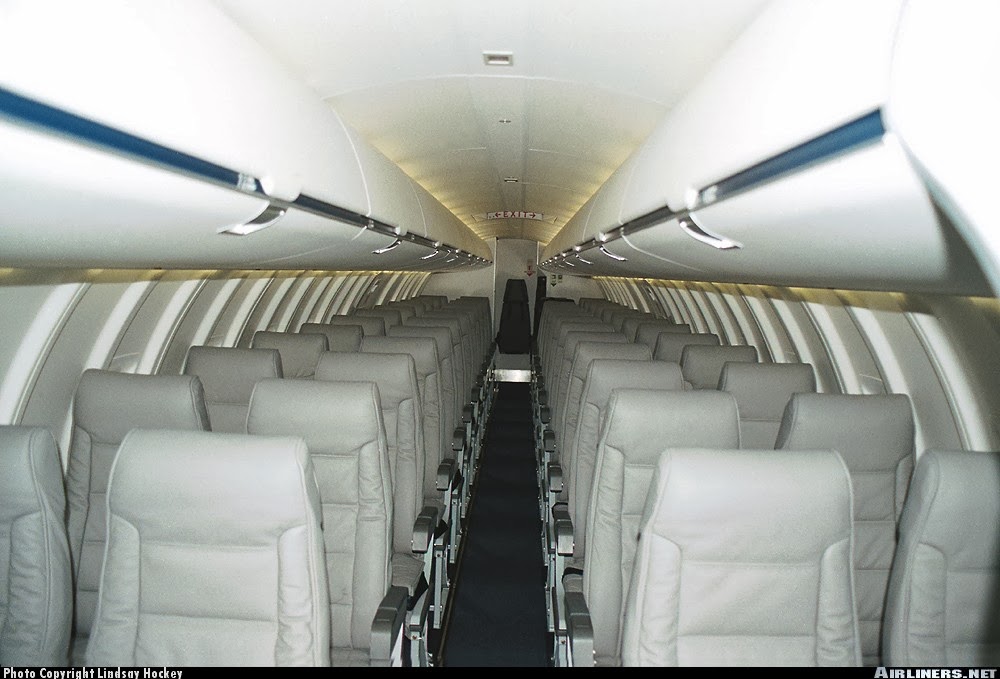 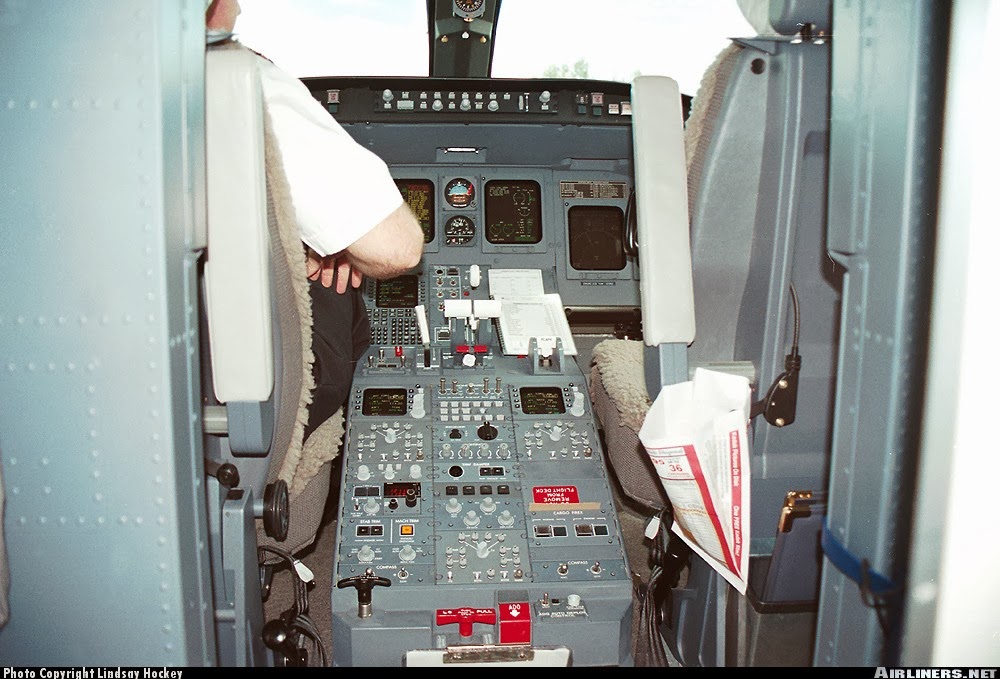 Kendell Airlines CRJ-200s were initially flown to Brisbane from Canberra, before eventually, a handful of the regional jets were based at Brisbane and utilised on services into Central Queensland.  The CRJ-200s replaced Ansett Brittish-Aerospace BAe 146-300s on services into Rockhampton, Mackay, Proserpine / Whitsunday Coast and Hamilton Island.  CRJ-200ER VH-KJQ is pictured below at Rockhampton Airport on Sunday 18 February 2001. 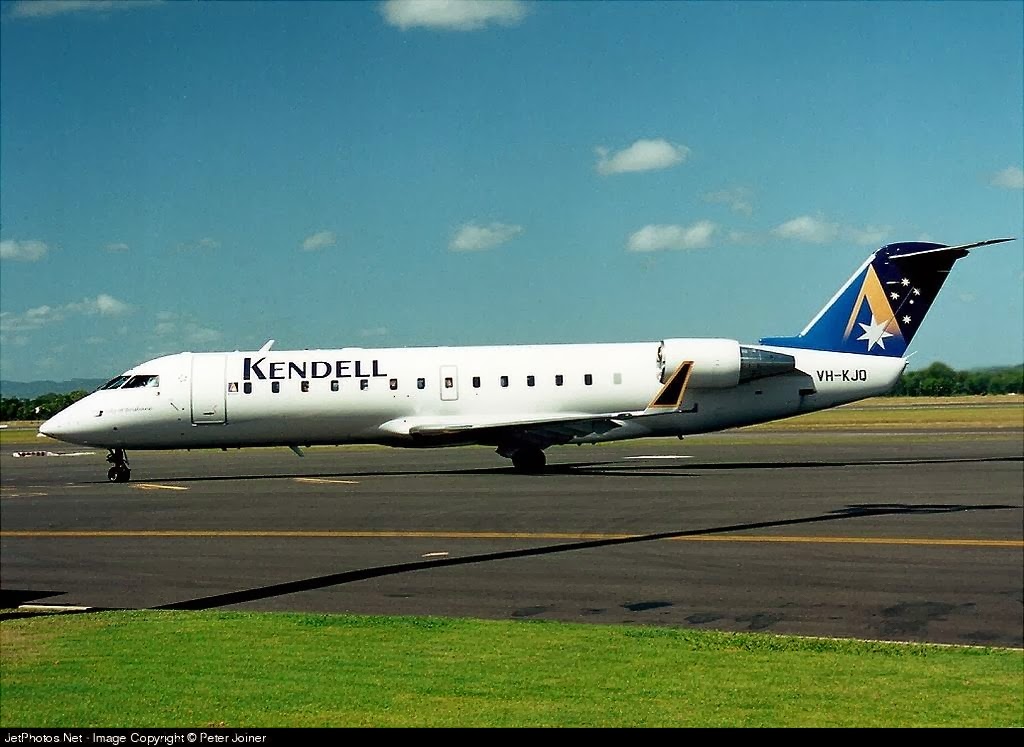 In mid-September 2001, shortly after the last CRJ-200 - VH-KXJ shown below -  had joined the fleet, Ansett Australia collapsed, also grounding the fleet of Kendell Airlines. Kendell Airlines was placed into administration, but continued to operate a limited schedule. 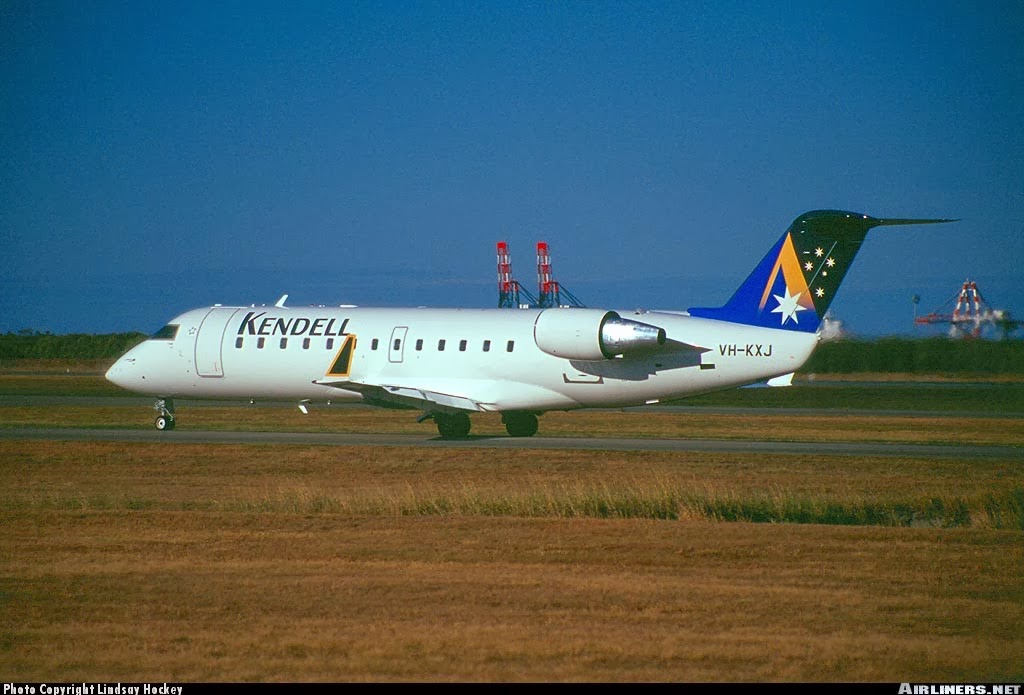 In 2002, Kendell, and fellow Ansett subsidiary, Hazelton Airlines, were sold to a consortium known as Australiawide Airlines, from which Regional Express Airlines (REX) was formed. Most of the turboprop aircraft operated by Kendell Airlines at that time were taken over by REX, while the CRJs were returned to lessors during 2002.  Most ended up in storage at Calgary in Canada as shown below in October 2002. 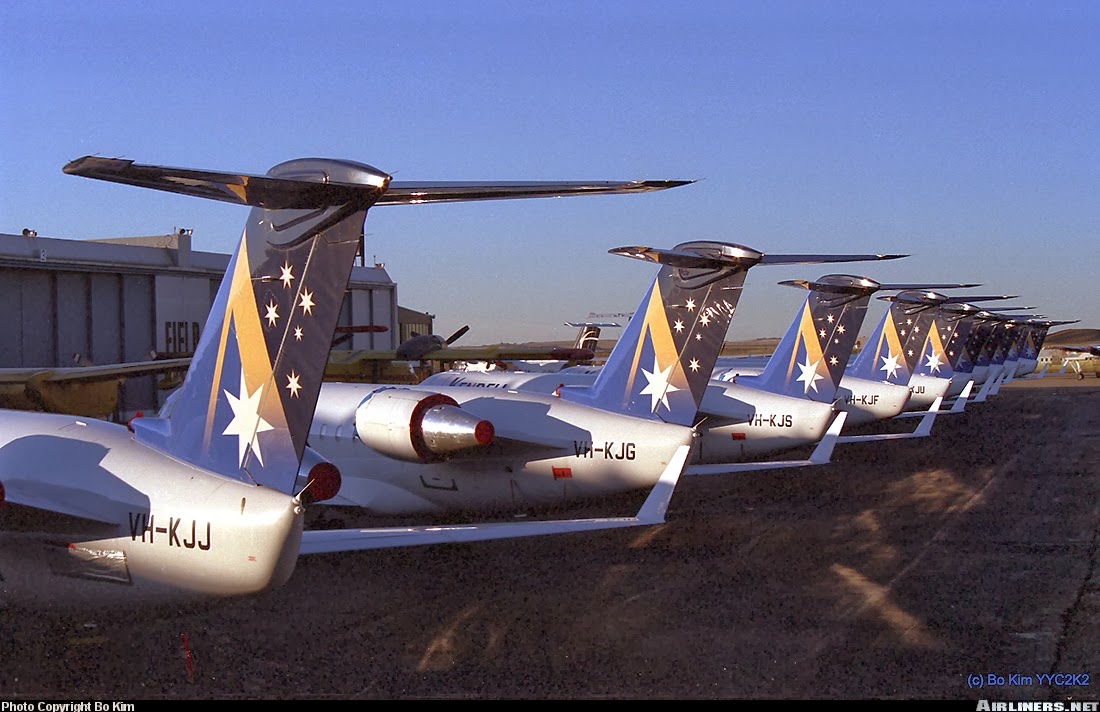 After a period of storage in Canada, the CRJ-200s have since re-entered service in various places around the world including Europe and, as shown below on the HNL Rarebirds Blog in August 2010, operating in the Hawaiian Islands for Go! / Mokulele Airlines. 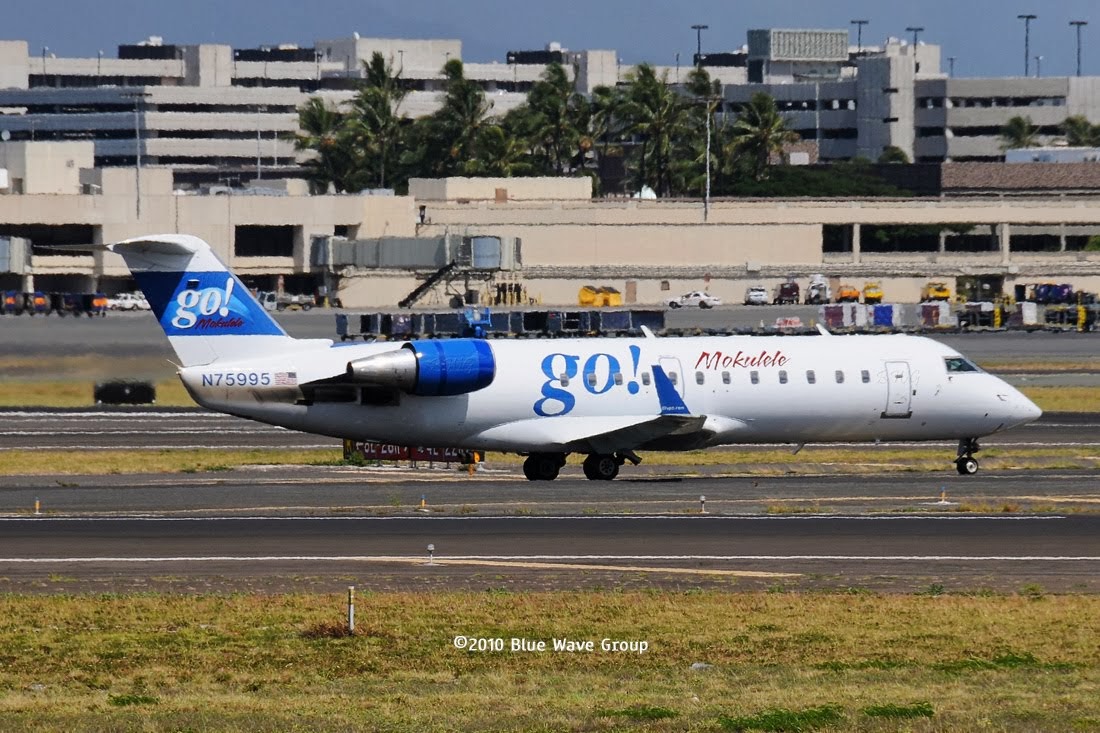 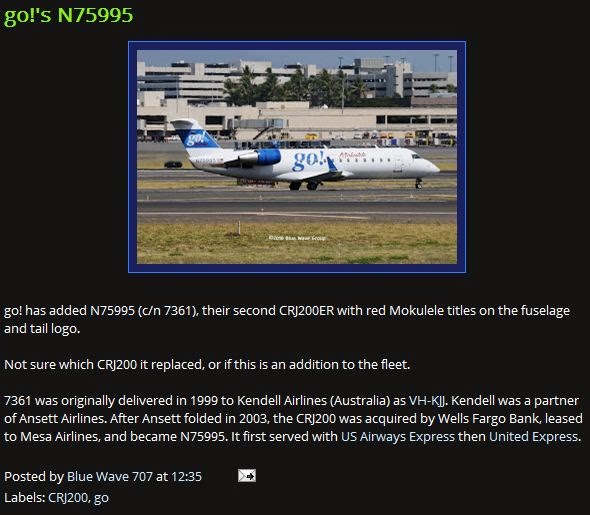 Certainly a great airline with a rich history in Australian aviation.  The CRJ-200 was a lovely looking little regional jet which unfortunately I was never able to get on board.  It was such a shame that Kendell Airlines fell victim to the Ansett colapse, and the CRJ-200s were not maintained in the REX - or any other Australian airline's - fleet.
Posted by Damian F at 8:32 AM