Soon after we'd checked into the IBIS Hotel at Mackay Airport on Sunday 17 February, I was able to photograph the unexpected arrival of Jetstar Airways Airbus A320 VH-JQG as it touched down at Mackay Airport while operating the scheduled JST930 service from Brisbane to Cairns. 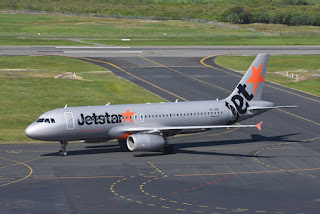 VH-JQG diverted to Mackay Airport after predicted storms up at Cairns and the high probability of holding would've seen the technical crew run out of hours.

That, combined with issues around the unloading of the passengers' baggage, saw fellow Jetstar A320 VH-VFJ then arrive into Mackay Airport after dark on Sunday 17 February, flying up empty from Brisbane as JST7994. 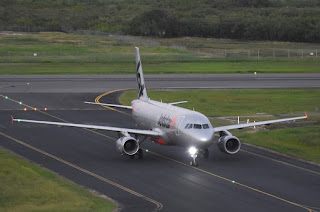 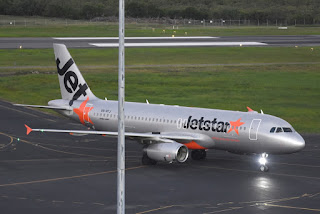 VH-VFJ was closed up for the night and technical crew transferred over to VH-JQG so they could fly the A320 and passengers up to Cairns on what was now the delayed JST930. 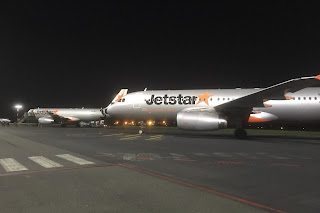 After staying for the night, early on Monday 18 February, VH-VFJ positioned empty from Mackay Airport to Cairns as JST7992 before heading off to Darwin. 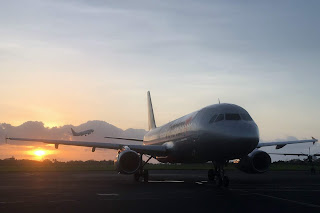 Of interest, VH-JQG had earlier operated into Mackay Airport on Sunday 17 February on the scheduled JST886/887 service before it was then heading to Cairns.  After it arrived into Cairns, now behind schedule, it then completed sectors to Perth and back before heading to Brisbane now on Monday 18 February.  VH-JQG then operated the scheduled JST886/887 service back into Mackay Airport also on Monday 18 February, albeit now somewhat delayed after the issues the previous day!