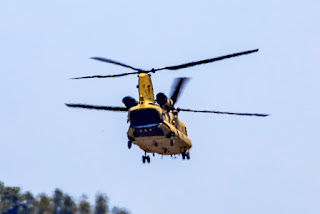 It appeared to fly in from Townsville and later depart to Oakey via overhead Maryborough.

Meanwhile, earlier on Sunday 17 February, Royal Australian Navy (RAN) NH Industries MRH-90 Multi-Role Helicopter A40-015 was noted completing airwork around and then calling into Gladstone Airport.  It is believed to have come from HMAS Choules (L100) which is in the area and was heard to be using the radio callsign of "Poseidon 15".

Sincere thanks to local photographer Russell P who managed to capture a quick photo at the Chinook departed Rockhampton Airport!