Before dawn on Friday 1 February, a pair of familiar bizjets were noted arriving into Mackay Airport.

The Queensland Government Airwing (State of Queensland) Raytheon Hawker 850XP bizjet VH-SGY was noted arriving from Brisbane.  It then returned to Brisbane during the middle part of the morning.

While Business Aviation Solutions Dassault Mystere Falcon 50 bizjet VH-FJQ was noted arriving from its Gold Coast base.  Around mid-morning, it departed to Auckland, New Zealand.


Meanwhile, up the road at Hamilton Island Airport, after arriving over a week ago, Kefford Corporation (of Victoria) Gulfstream IV-SP N7DK departed for Melbourne (Essendon) also on Friday 1 February.  It had arrived from there via Sydney and the Gold Coast back on Tuesday 22 January.

While on the lighter of corporate movements, noted visiting Hamilton Island Airport, also on Friday 1 February, was Sydney-based Midgeon Aviation / Vectra Holdings Textron Aviation B200GT Super King Air VH-MHQ.  It arrived from and later departed back to its Bankstown base. 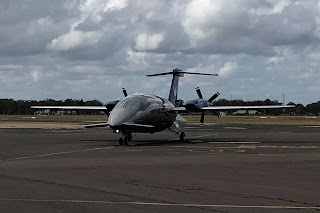 It looked to arrive from Sydney (where it arrived yesterday) before departing a short time later for Coffs Harbour.