On Sunday 17 February, I was lucky enough to be at the right place at the right time to capture some photos of QantasLink Dash-8-Q400 VH-QOW at Mackay Airport the day after it emerged from the paint-shop wearing its new 'Silver-Roo' colour scheme. 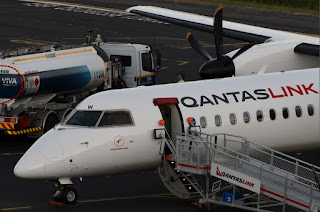 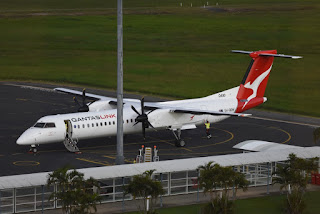 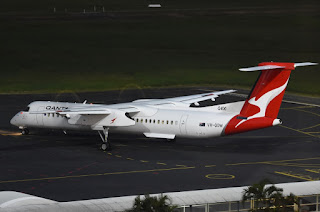 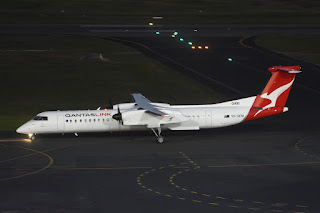 It had called in earlier in the day and on this occasion it was operating the evening QLK2510/2511 service at Mackay Airport from and back to Brisbane.

At the time of writing, on Monday 18 February, it is due to call into Bundaberg and Moranbah Airports before returning to Mackay Airport in the early evening.

VH-QOW emerged from the Flying Colours paint-shop at Townsville Airport the previous day and joins several other Dash-8-Q400s in the new and updated Qantas livery and kangaroo logo, which was introduced to coincide with the introduction the Boeing B787 Dreamliner into service with the airline in 2017.  They are becoming quite a common sight at most Central Queensland Airports and I believe there is only one more Dash-8-Q400 - VH-QOU - and the fleet of Dash-8-Q400 Next Gen aircraft awaiting re-painting. 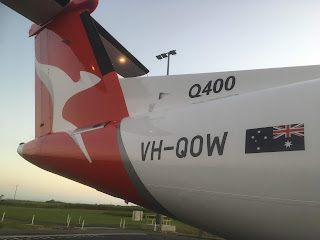 It is unclear at this stage which aircraft are now in the Flying Colours paint-shop.

Of interest, it appears that VH-QOW has now been (re-)named 'Mornington'. 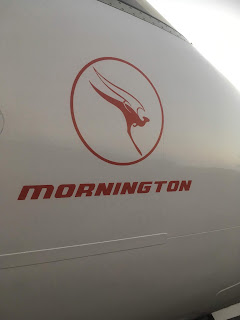 In 2010, it was named 'Taronga' and painted in an attractive livery promoting the Taronga Western Plains Zoo at Dubbo.  Once the livery was removed however, the aircraft didn't appear to then carry a name.

Of further interest, it appears that QantasLink has commenced re-painting their Cobham Aviation-operated Boeing B717-200 jets with VH-NXD recently noted rolling out of the Flying colours hangar looking resplendent in the new 'Silver Roo' colours.