We've posted previously about the Mackay Airport-based Flyon Helicopters and the changes to the fleet with their three Agusta A109 helicopters.

We recently spotted for the first time A109E VH-ZCF - which has previously operated for the RACQ LifeFlight Rescue Helicopter Service - back in town and operating flights from Mackay Airport to the Blossom Banks and return.  VH-ZCF recently returned to Mackay Airport in early September after being repainted and refurbished at Melbourne (Essendon). 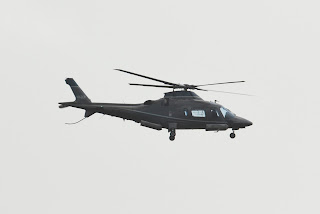 Also receiving an overhaul but at Redcliffe was fellow Agusta A109E VH-RUA.  It had departed Mackay Airport in late September but finally returned to Mackay Airport from Redcliffe via Gladstone Airport on Thursday 21 February.


Flyon's other Agusta A109E VH-XUM continues to operate for Flyon Helicopters out of Mackay Airport on flights to and from the Blossom Banks.

UPDATE!  On Monday 4 March, VH-XUM was noted ferrying into Redcliffe for planned maintenance from its Mackay Airport base via Gladstone Airport.

Flyon Helicopters operates out of Mackay Airport predominately on Marine Pilot transfer flights for the compulsory area of Hydrographers Passage, off Mackay.  They also offer additional helicopter charter services including corporate and private charter, aerial filming and photography, mining support, including crew and employee transfers.  All Flyon activities are carried out under the AOC of Jayrow Helicopters.

Check out Flyon Helicopters Facebook page for more information and some great photos of their helicopters in action - https://www.facebook.com/FlyonHelicopters/
Posted by Damian F at 9:59 PM