A couple of sleek new EC135 helicopters have been noted flying around Mackay Airport and other Central Queensland Airports in recent weeks with one now on a cross-county trek over to Western Australia.  They appear to have been prepared for flight in the Heli-Aust Whitsundays hangar at Mackay Airport. 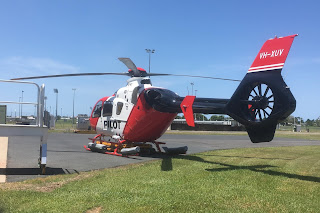 Eurocopter EC135 P2+ helicopter VH-XUV was spotted resting outside the hangar at Mackay Airport during the week.  It appears to continue to operate local test flights and was also recently noted spending a couple nights at Gladstone Airport where it replaced fellow Heli-Aust Whitsundays Airbus Helicopters EC135 P3 (CPDS) VH-ZGP which currently operates with Gladstone Helicopters on marine transfer flights to and from the Gladstone Harbour. 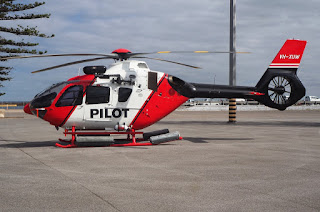 VH-XUW has since been photographed several times (as above) operating at the Adelaide Harbour where it appears to be completing demonstration flights for local operators including winching exercises since arriving in the area at the start of the week.

VH-XUW is expected to continue to Port Hedland in Western Australia where another Heli-Aust Whitsundays Airbus Helicopters EC135 T3 VH-XUU has operated since May 2018.