On Thursday 7 February, all scheduled flights in and out of Proserpine (Whitsunday Coast) Airport were cancelled as a result of the rather inclement weather passing through the Whitsundays.

Meanwhile, also on Thursday 7 February, QantasLink (Cobham Aviation) Boeing B717-200 VH-YQV was spotted on the ground at Rockhampton Airport after diverting from Hamilton Island Airport. 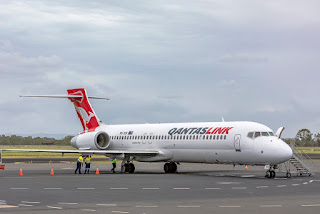 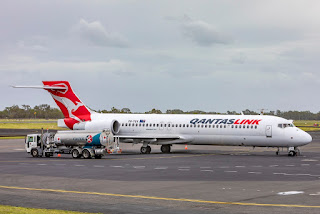 VH-YQV was operating as QJE1572 from Sydney to Hamo but after a period of holding and at least one failed attempt to land, the B717 diverted to Rocky.

After taking on fuel, VH-YQV was noted returning to Sydney again as QJE1572.

It also appears that fellow QantasLink Dash-8-Q400 VH-QOR which was operating as QLK2824 from Brisbane to Hamilton Island Airport returned to Brisbane after also not being able to land.

These cancellations and diversions cap off a frustrating few days for travellers in and out of the Whitsunday region with the weather causing other delays and cancellations during the course of this week.

On Wednesday 6 February, a Jetstar Airways flight from Melbourne (Tullamarine) to Proserpine - JST832 operated by A320 VH-VQW - diverted to Brisbane.

While some flights during the afternoon also on Wednesday 6 February had problems landing at Mackay Airport and were forced to hold for the weather to clear.

Finally, back on Monday 4 February, another Jetstar flight from Melbourne to Proserpine - JST832 operated by A320 VH-VFK - diverted to Mackay Airport.  It was later able to position to Prosie as JST7994 before departing back to Melbourne, now somewhat delayed, as JST831.

While also on Monday 4 February, the morning Virgin Australia service from Brisbane - VOZ1115 operated by B737-800 VH-VOK - returned to Brisbane after being unable to land at Prosie.

All photos taken by Russell Prothero  ©
Posted by Damian F at 8:41 PM