On Saturday 9 July, several nice Australian-based, as well as American-registered, bizjets were noted and spotted calling into the Whitsundays.
Perhaps the nicest was private American-registered Gulfstream Aerospace G650ER (G-VI) bizjet N988NC which arrived into Proserpine (Whitsunday Coast) Airport from Hamilton Island Airport.  It earlier flew down to Hamo from Cairns where it looked to clear Australian Border Force requirements after arriving into Australia from overseas. 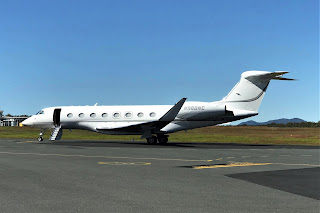 It is assumed that N988NC is parked at Prosie for a period of time and indeed, at the time of writing, the attractive Gulfstream was closed up for the at least the night. 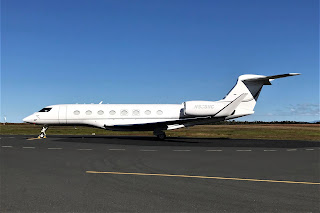 UPDATE!  It appears that early on Sunday 10 July, N988NC departed Proserpine Airport and jumped back across to Hamilton Island Airport where it is seems to be staying.
Also spotted paying Proserpine (Whitsunday Coast) Airport a visit once again was Singapore-based American-registered Gulfstream Aerospace G-V bizjet N881HS.  It looked to fly down from and then back to Cairns after only flying up there from Sydney via Prosie the previous day. 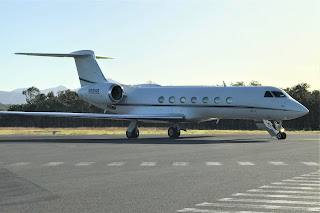 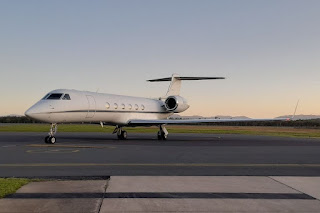 At the time of writing, N881HS has departed Cairns for Denpasar (Bali).
Also spotted visiting Proserpine (Whitsunday Coast) Airport was McDermott Aviation Group / Machjet International Cessna 525C CitationJet CJ4 bizjet VH-PIY.  It arrived from the Sunshine Coast and later departed to the Gold Coast.  Of interest, it had earlier flown across from Perth (West Australia) to Sydney and then the Sunny Coast before heading to Prosie. 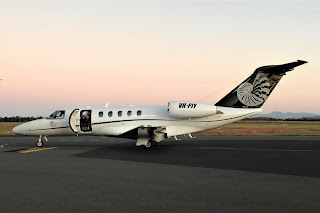 At the time of writing, VH-PIY was returning to the Sunshine Coast.
And  Moorabbin Aviation Services (Victoria) Raytheon B200 King Air VH-VTQ finally departed Proserpine (Whitsunday Coast) Airport for Melbourne (Moorabbin) via Bourke and Melbourne (Essendon). 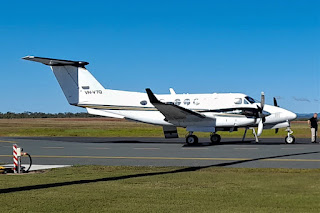 VH-VTQ had arrived into Prosie from Essendon on the last day of June.
While over at Hamilton Island Airport, aside from the quick visit by the G-VI N988NC, fellow Gulfstream G-VI (G650ER) VH-LAL of Little Aviation (Victoria) finally departed for its Melbourne (Tullamarine) base.  It had arrived into Hamo from there on Monday 4 July.
As predicted below, Divair (Air Link) Cessna 525B CitationJet CJ3 bizjet VH-NNE returned to Hamilton Island Airport from Sydney.
While Sydney-based JJ Air Textron (Cessna) 208 Amphibious Caravan VH-JLK looked to arrive into Hamilton Island Airport from Bankstown via the Sunshine Coast and Gladstone Airports.
UPDATE!  VH-JLK looked to return South to Bankstown on Thursday 14 July.
And West Wing Aviation / Helicopters Townsville Beech 58 Baron VH-ABP visited Hamo from its Townsville base.  As did ZephAir Australia - Aircraft Charters Piper PA-31 Navajo VH-AYT which also visited Hamilton Island Airport from its Townsville base.
Finally, also around the region, also on Saturday 9 July, Avcair (Avgunn) LearJet 60 bizjet VH-OLJ arrived into Rockhampton Airport from Brisbane.
UPDATE!  On Sunday 10 July, VH-OLJ departed Rockhampton Airport and returned to Brisbane.
Townsville-based Forster Helicopters Bell Helicopter Textron 407 helicopter VH-DKU  looked to fly down from Mackay Airport to Hedlow Airfield and then Rockhampton and Gladstone Airports.  VH-DKU was noted at the Whitsunday Airport at Shute Harbour on Friday 8 July.
And some aerial survey aircraft seen on radar operating in the region included Aerometrex Vulcanair (Partenavia) P.68C VH-CFE which completed aerial survey work before it later landed at Emerald and then Mackay Airports.  Fellow Aerometrex Cessna 404 Titan VH-TRC departed Mackay Airport to complete aerial survey work over Rockhampton before then landing at Gladstone Airport.
VH-TRC had arrived into Mackay Airport on Thursday 7 July - as posted above.
Handel Aviation Cessna 310R VH-NXS departed Cairns to land at Mackay Airport before then departing and completing aerial survey work over Mackay.  It then flew down at landed at Gladstone Airport as well.  Of interest, it looks like VH-NXS flew North via Mackay Airport on Thursday 7 July.
Bayswater Road / Australian Aerial Mapping (AAM) Reims F406 VH-EYQ and Aero Logistics Cessna 404 VH-AZU were noted again completing an aerial survey flights out of Emerald Airport.
Sincere thanks to the local plane spotters for taking the time to capture and send through these great photos from the Whitsundays!
Photos taken by 'AC' and Nick Sainsbury  ©
Posted by Damian F at 9:09 PM