The five victims of Queensland's worst helicopter crash will be remembered today on the anniversary of the tragedy.

In the early hours of Monday 24 July 2000, Capricorn Helicopter Rescue Service (CHRS) Bell 206 VH-FFI was operating a rescue flight, taking a sick five-year-old boy to hospital. The helicopter crashed in darkness and heavy fog, in a field near Marlborough in Central Queensland. The boy, his mum, and three crew lost their lives in the crash.

The CHRS chopper had flown to pick up the five-year-old boy with breathing problems from a remote property northwest of Rockhampton.

In 2003, an inquest found low fuel was to blame for the crash and heavy fog had been a significant factor. 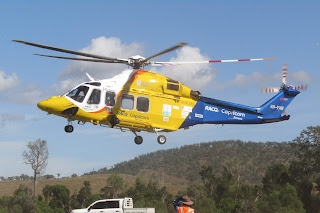 Pictured above is one of the Capricorn Helicopter Rescue Service's current choppers - recently delivered Babcock Mission Critical Services Australasia operated Agusta S.P.A. AW139 Helicopter VH-YXR - arriving into the very successful Old Station Fly-in and Airshow at Raglan.  VH-YXR operates for the service as the primary "Rescue 300".
Fellow Babcock Bell 412EP helicopter VH-EPR also operates out of Rockhampton Airport and has been a long-term part of the CHRS fleet as the usual "Rescue 300".
Posted by Damian F at 7:30 AM