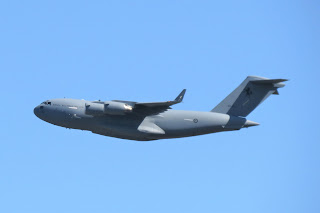 It was heard to be flying as "Stallion 24" and departed and then returned to RAAF Base Amberley.
Meanwhile, also on Thursday 7 July, a pair of Royal Australian Air Force (RAAF) Alenia C-27J Spartan transport aircraft were both noted completing airwork at Bundaberg Airport.
A34-005 as "Wallaby 21" and A34-006 as "Wallaby 16" both looked to fly up from Amberley to Bundaberg where they completed airwork with A34-005 "Wallaby 21" also completing some 'touch-and-go' landings at Bundy.
Both Spartans then returned to Amberley.
Photo taken by 'IAD'  ©️
Posted by Damian F at 9:09 PM