On Wednesday 13 July, Link Airways (Corporate Air / Vee H Aviation) Metro 23 VH-VEK flew out from Brisbane to call into Longreach and Boulia Airports before then heading back to Brisbane. 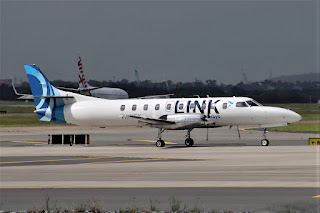 This appears to be a weekly run out to these places - perhaps a Fly-in Fly-out (FIFO) charter run?

While after operating two days worth of FIFO charter flights between Rockhampton Airport and the Labona Station Airstrip within Adani Australia's (Bravus Mining & Resources) Carmichael Coal Mine site, Skytrans Airlines Dash-8-100 VH-QQC was noted departing Rockhampton Airport for Townsville as SKP787.
It later flew down to Labona as SKP788 and then across to Mackay Airport as SKP792 and is scheduled to 'position' to Proserpine (Whitsunday Coast) Airport and then continue to Cairns, early on Thursday 14 July.
And Hinterland Aviation Cessna 208 Caravan VH-TFS was noted flying down from Cairns to Labona as HND648 before then flying across to Rockhampton Airport as HND313.  VH-TFS then returned to Cairns as HND648.
Fellow Hinterland Aviation Cessna 208 Caravan VH-TFQ completed a local flight to Gladstone Airport, out of and back to Rockhampton Airport as HND450.
Meanwhile, also on Wednesday 13 July, Beech A36 Bonanza departed Mackay Airport for its Townsville base.  It had arrived at the end of June.
SOCATA TB-10 VH-YHE visited Rockhampton Airport from its Gladstone Airport base.
While Canberra-based SOCATA TBM 700 VH-YZZ flew into Longreach Airport from Darwin.
UPDATE!  On Thursday 14 July, VH-YZZ departed Longreach Airport for the Ballina / Byron Bay Gateway Airport and then Canberra.
And Australian Wings (Flying) Academy (Gold Coast) Diamond Aircraft Industries DA40-D aircraft VH-YHM was noted visiting Bundaberg Airport from its Gold Coast base.
Finally, also on Wednesday 13 July, Bowenville (near Toowoomba) based Cessna 525 CitationJet CJ1+ bizjet VH-JSZ called into Rockhampton Airport, arriving from Archerfield and then departing to Townsville and Natal Downs.