On Wednesday 27 July, Royal Australian Air Force (RAAF) Dassault Falcon 7X bizjet A56-003 was noted back in Central Queensland this week, and again visiting a couple of CQ Airports while looking to be on another training flight. 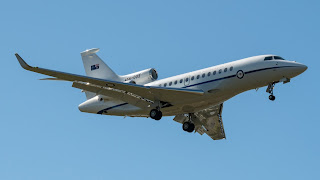 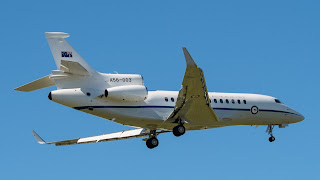 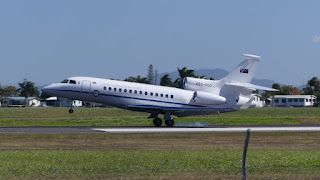 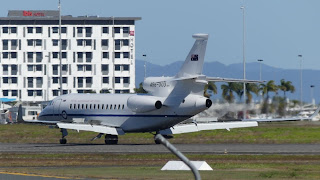 The Falcon 7X bizjet, which is flown by the RAAF's VIP 34 Squadron, was this time flying as "Envoy 27" and looked to fly up from Canberra to Coffs Harbour before then landing at Bundaberg Airport. It then flew up to Mackay Airport where it was spotted landing on Runway 14.

A56-003 "Envoy 27" then departed to a missed approach at Cairns before landing at Townsville where it seems to be staying for the night.

As with similar training flights, the Falcon 7X bizjet should call into other CQ Airports on Thursday 28 July while it returns to Canberra.

UPDATE!  Indeed on Thursday 28 July, A56-003 "Envoy 27" departed Townsville and called into Proserpine (Whitsunday Coast) and Rockhampton Airports before returning South to the Gold Coast and Canberra via another missed approach at Tamworth.
As posted below, over the course of Monday 25 July and Tuesday 26 July, A56-003 completed a similar pattern of 'training flights' but using the flight number and radio callsign of "Envoy 26".
Photos taken by 'TM' and 'JM'  ©️
Posted by Damian F at 8:57 PM