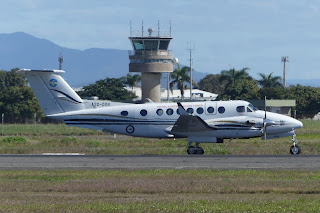 A32-008 as "Hudson 05" and A32-021 as "Hudson 07" both flew up from the Sunshine Coast to Gladstone Airport where they both completed a missed approach, before then flying up to and landing at Mackay Airport.
After some time on the ground, both Super King Airs looked to depart Mackay Airport and continue up to Cairns.
Photo taken by 'TM'  ©
Posted by Damian F at 9:16 PM