Meanwhile, also on Thursday 7 July, Aerometrex Cessna 404 Titan VH-TRC was spotted as it arrived into Mackay Airport.  It looked to arrive from the West via some aerial surveying over the Mackay area. 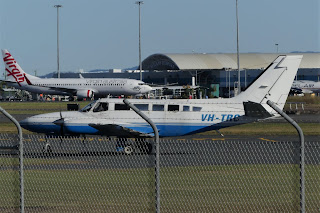 While recently arrived Tasmania-registered Helicopter Resources P/L's Eurocopter AS.350B3 Squirrel helicopter VH-UUG was photographed as it arrived back into Mackay Airport after completing one of its many daily flights out to sea and back, presumably ferrying marine pilots to and from ships. 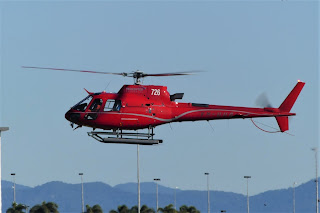 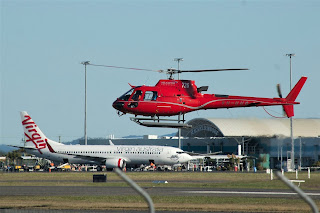 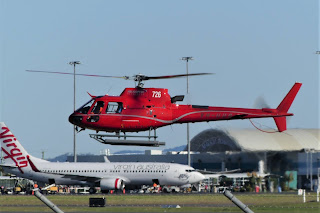 And also noted arriving into Mackay Airport was the Queensland Police Service (Airwing) (State of Queensland) Cessna 208 Caravan VH-PSQ looked to arrive into Rockhampton Airport from the South (Brisbane?) before then continuing to Mackay Airport where it appears to have stayed.
Finally, also on Thursday 7 July, brand new Ipswich-based Airborne P/L (Palm Lake Works) Pilatus PC-12/47E VH-VLQ was noted visiting Bundaberg Airport again from the Gold Coast.
While Sunshine Coast-based Rockwell International 114 VH-KSW flew up from Archerfield to Rockhampton Airport before flying down to Caboolture.  It also visited Rockhampton Airport on Tuesday 5 July, flying in from Caboolture and then out to Archerfield.
New Zealand Aerospace (Pacific Aerospace) CT/4A Airtrainer VH-APV (ex RAAF A19-074) flew into Rockhampton Airport from Caboolture before then departing to Townsville and Mareeba.
And re-registered Interair (Essendon) Piper PA-31 Navajo VH-PJU flew across from Mount Isa to Emerald Airport and then Hervey Bay (Fraser Coast) Airport.  It looks to have been completing aerial survey flights out of Mount Isa.
Photos taken by Tony Haynes and 'JM'  ©️
Posted by Damian F at 8:40 PM