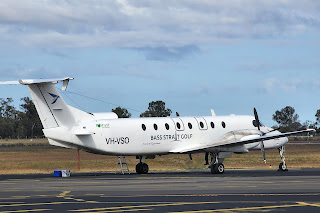 As it has done for the past month or so, VH-VSO (or sister-ship VH-YSO last week) landed at Emerald from West Sale and Bourke before later departing back to West Sale and then to Melbourne (Moorabbin).

While Austrek Aviation Beech B200 King Air VH-WXO flew out of the Gold Coast for Longreach Airport. It then departed to Alice Springs and Peterman (Kings Street Station) in the Northern Territory.

Raytheon 58 Baron VH-EZR arrived into Longreach Airport from its Chinchilla Airport base.
UPDATE!  On Thursday 14 July, VH-EZR departed Longreach Airport and returned to Chinchilla Airport.
DeGunst Transport P/L Textron (Cessna) 208 Caravan VH-NPZ made its weekly flight from Bundaberg to Nebo Airfield before then flying across to Mackay Airport, where it seems to be staying for the night.
UPDATE!  On Wednesday 13 July, VH-NPZ departed Mackay Airport for Rockhampton Airport before returning to Bundy.

Pilatus PC-12/47E VH-MDH of M. D. H. P/L (Cloncurry) was noted flying across from Devoncourt Station to my local Clermont Aerodrome before it later departed to Archerfield.

And the Queensland Government Airwing (State of Queensland) Raytheon B300 Super King Air VH-SGQ flew north from Brisbane to Cairns before then calling into Townsville and Rockhampton Airports and the back to Brisbane.