This week has seen the start of Alliance Airlines and Skytrans Airlines also operating fly-in fly-out (FIFO) charters between Brisbane and Emerald Airports for AERgO.

The FIFO flights had previously only been operated by Regional Express (REX) / Pel-Air Avaition SAAB 340 aircraft - as shown below recently. 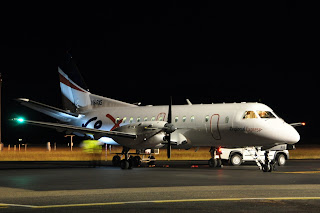 This revision in the schedule sees Alliance operated Fokker F-70 and F-100 aircraft arrive into Emerald on Monday and Friday nights, with the aircraft staying overnight and departing early the next day.  One other change to the schedule sees a Skytrans Dash-8 operating for AERgO into Emerald on Wednesday night and overnighting.  The SAAB services remain on Tuesday night and Wednesday morning with aircraft operating Brisbane-Emerald-Brisbane at these times.

This week, on Monday 14 May, VH-FWI operated the first Alliance operated AERgO service to arrive at Emerald Airport.  On Friday 18 May, Fokker F-70 was photographed shortly after arriving at Emerald from Brisbane as 'UTY650'. 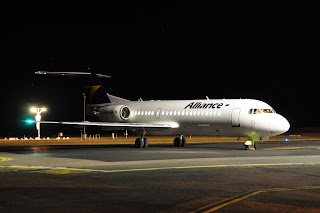 Also on Friday 18 May, I spotted three afternoon and evening QantasLink (Sunstate Airlines) services - Emerald Airport is usually a very busy place on a Friday afternoon, with heaps of contract and other (mostly) mine workers heading home for the weekend.  QantasLink Dash-8s photographed were Next-Gen Q400 VH-LQF (departing as QLK2415), Q400 VH-QOD (named 'Emerald' and later departed as QLK2419), and Q300 VH-SBG (which later departed as QLK2417). 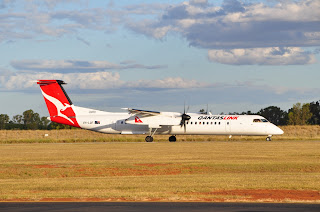 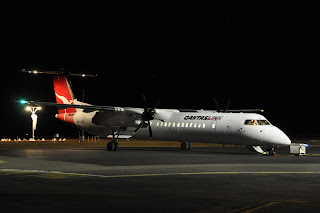 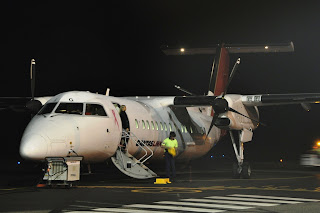 At least one of these afternoon/evening flights on a Friday will be upgraded from June, and operated by a larger capacity Alliance Airlines Fokker F-100.

Virgin Australia also has an evening departure from Emerald, and ATR 72-500 VH-FVH was noted operating the DJ1262 which is shown preparing to depart Emerald. 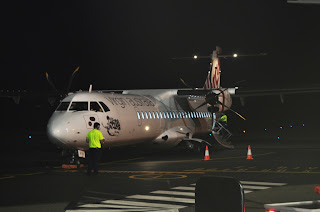 Two other interesting aircraft at Emerald on Friday I photographed before the sun went down - Barrier Aviation AeroCommander 500-S VH-WRG which has been apparently parked up for a little while now. 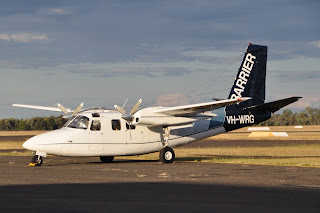 Also Par-Avion (Airlines of Tasmania) Pilatus Britten-Norman BN-2A-26 Islander VH-RQW has been based at Emerald Airport for a short time while it conducts aerial survey flights around the local mining region. 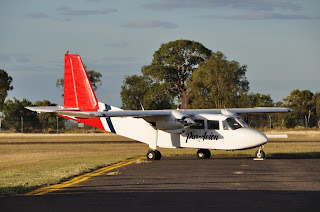 Toll Express Aviation Metro III VH-UUO was also present and later departed to Thangool.  This aircraft had some problems during the week and caused a 'reshuffle' of aircraft which saw an ATR 43F pop into Rockhampton Airport (see Blog Post below). 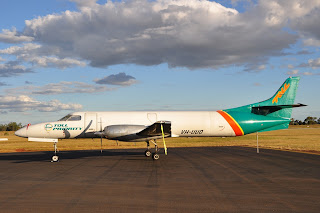 A great way to spend a Friday night!
Posted by Damian F at 12:00 PM