The three bizjets – Execujet Australia’s Canadair CL-604 Challenger VH-VRE and Gulfstream IV VH-DBT, and Execujet New Zealand's Gulftream G-V (G550) ZK-KFB – all arrived into Gladstone from Brisbane during the morning, and remained parked, before departing in the later afternoon. 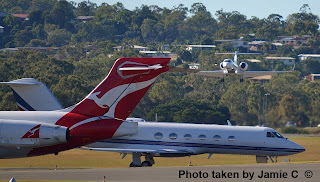 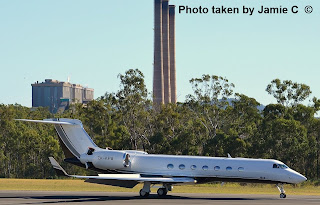 One other interesting visitor to Gladstone Airport is this Sikorsky S-76A registered VH-HRP to CHC Helicopters.  It is currently flown by, and wears the colours of the Royal Australian Air Force (RAAF) Search and Rescue Service.  It is photographed below on Sunday 13 May, but was also noted at Gladstone Airport in April. Jamie also sent through a couple of fabulous images of QantasLink's - Cobham Aviation operated - Boeing B717-200 aircraft that have started flying into Gladstone from Brisbane.  Below are VH-NXQ which is about to touch down on Runway 10 on Friday 4 May.

Also photographed is VH-NXN which is shown just after lift-off from Runway 28 on Monday 7 May.

We thank Jamie for sending through his fantastic images!
Posted by Damian F at 7:51 PM