A Quick Look at Longreach Airport - Plus Some Interesting Movements

Brandon G is a Brisbane-based plane spotter and flying student, who recently travelled to Longreach to do some spotting and photography, and to also visit some of the local attractions including the Qantas Founders Outback Museum (QFOM). 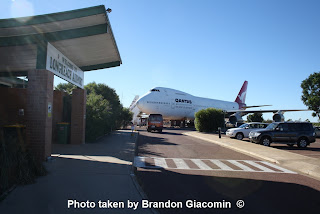 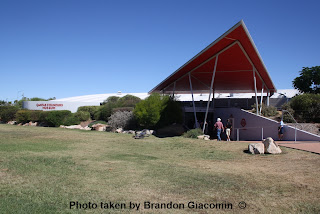 This post will show-off some of the aircraft Brandon saw at Longreach Airport during his stay – and also highlight some other interesting visitors that have passed through Longreach Airport in more recent days and weeks. 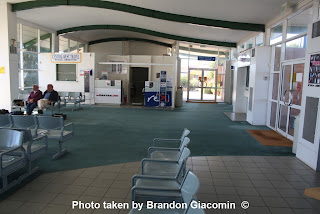 Brandon arrived at Longreach Airport on Saturday 5 May from Brisbane direct aboard this QantasLink Dash-8-Q400 VH-QOS. 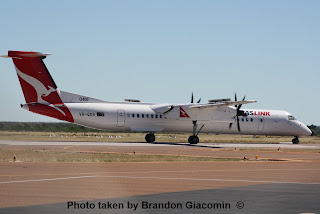 Another QantasLink Dash-8 – this time a Q300 series – in the form of VH-SBI was also noted by Brandon after arriving at Longreach from Brisbane and Barcaldine. 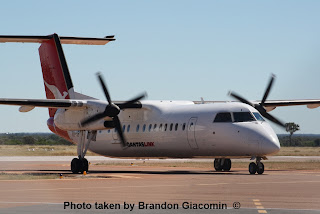 Lastly, a familiar sight at Central Queensland airports in the form of QantasLink Dash-8-Q400 VH-QOW wearing its Taronga Western Plains Dubbo Zoo colour scheme, arrived into Longreach Airport on Sunday 6 May to take Brandon back to Brisbane at the end of his short stay. 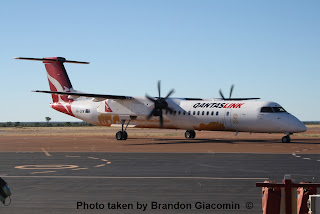 QantasLink currently flys daily services to Longreach from Brisbane.  Some of the flights travel via Barcaldine, and some travel via Blackall.

Regional Express (REX) also flys into Longreach - twice a week on Tuesday and Thursday - routing from Townsville to Winton to Longreach and return over the same route. 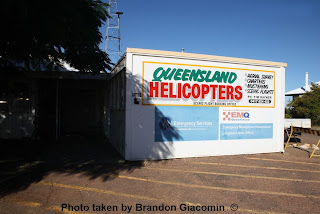 Brandon managed to secure a seat on a 10-minute scenic flight over the Longreach township on board Robinson R-44 VH-HOQ. 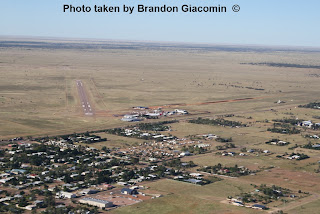 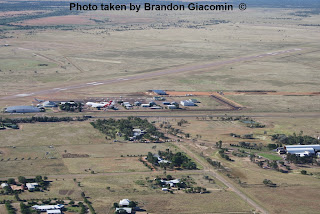 He managed to snap VH-HOQ as he was enjoying a ‘wing walk’ on the QFOM’s Boeing B707 VH-XBA. 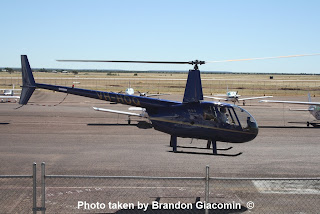 Royal Flying Doctor Service (RFDS) King Airs make frequent visits into Longreach – flying in mostly from the RFDS base at Rockhampton Airport.  The photo below shows VH-FDI taking on fuel during a late afternoon visit - this time from Brisbane. 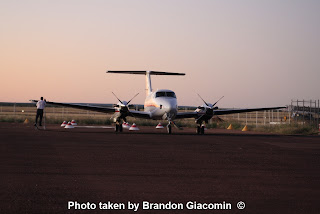 One interesting visitor during Brandon’s visit was Gulfstream G-IV bizjet registered N810LP.  Despite having an American registration, this aircraft is based at Essendon Airport in Victoria. It arrived on Saturday 5 May and departed on Sunday 6 May. 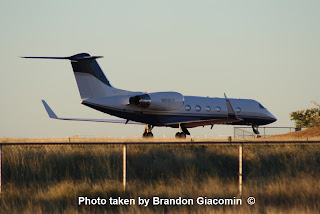 It arrived at Longreach from Sydney on Tuesday 15 May, and departed to Tindal in the Northern Territory on Wednesday 16 May.
Posted by Damian F at 8:56 PM