Despite the inclement weather - and a family emergency - Jamie C has still managed to capture some fantastic photos of some recent action from late last week and over the weekend at Gladstone Airport.

On Friday 25 May - and in absolutely pouring rain - Jamie caught a visiting SOCATA TBM 700 in form of VH-ICA.  This aircraft is registered to Dromahair at Tamworth in New South Wales, and actually a frequent visitor to Central Queensland!

Also spotted was Raytheon 1900D VH-PSK.  Again this aircraft is very much a regular all over Central Queensland, as it operated for the Queensland Police Airwing and ferries mostly criminals and police all over Queensland to attend court hearings and the like.

One last photo Jamie managed to take on Friday was of QantasLink Dash-8-Q400 Next Gen VH-LQB moments after rotation from Gladstone's Runway 10.  The spectacular image below show what can happen on a wet and humid day - lovely prop-tip vortices as the Dash-8 powers into the air!

On Saturday 26 May, an interesting visitor in the form of Skytrans Airlines Dash-8-100 VH-QQL popped into Gladstone Airport twice.  Sources indicate that VH-QQL operated a charter flying Brisbane-Gladstone-Cairns-Gladstone-Cairns.

The photo below with VH-QQL parked on the upper part of the Gladstone Airport apron also shows the new apron lighting which was recently installed - although obviously not yet turned on! 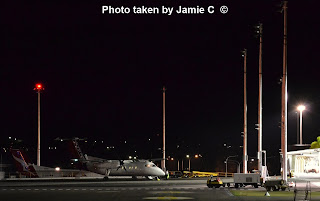 Lastly, on Sunday 27 May, a lovely Eurocopter EC135 P2+ - VH-VJB - called into the Airport.  This chopper was a long way from home, normally based at Melbourne's Moorabbin Airport with MicroFlite Helicopters.

Also on Sunday, Jamie captured a couple of lovely photos of QantasLink (Cobham Aviation) Boeing B717-200 VH-NXQ as it called into Gladstone Airport from Brisbane. 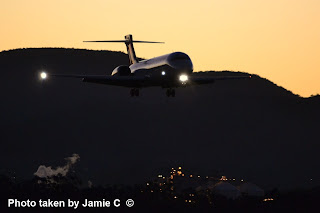