Gladstone Airport played host to a few interesting visitors on Monday 14 May, and much to our delight, Jamie C has sent through several fantastic looking photos of the day’s events!

A trio of helicopters were noted by Jamie with this bright-yellow Pacific Helicopters Bell 212 – registered P2-PAY – perhaps being the highlight.  The big bell chopper is registered in Papua New Guinea and popped into Gladstone Airport for fuel.

Another chopper in the form of Northern Territory-based Aerospatiale AS.355F1 VH-ZWP was photographed flying around Gladstone Airport.

Lastly, Bell 47G-2A-1 VH-AKN which is owned by the Creed Grazing Co at the "Old Station" near Raglan also arrived. 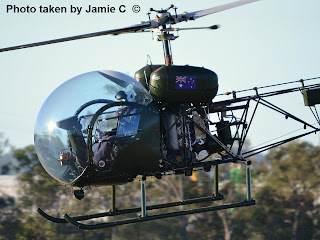 As mentioned in a Blog Post below, the Creed Family will host a Fly-in and Machinery Show at the "Old Station" farm on Saturday 26 May.

A little earlier in the day, Jamie captured the arrival of Brisbane-based Cessna 550 Citation Bravo VH-CCJ.  The bizjet had a busy day and not only popped into Gladstone, but was also noted at Mackay Airport and later Rockhampton Airport on Monday 14 May.

Also during the morning, QantasLink (Cobham Aviation-operated) Boeing B717-200 VH-NXN was noted operating from and back to Brisbane.

He also caught General Aviation Maintenance (GAM) AeroCommander 500-S VH-YJJ as it departed to Rockhampton on its nightly freight run.

We welcome Jamie to the Blog and thank him for his fantastic photos…  expect more later!!
Posted by Damian F at 7:39 AM