A Few Other Interesting Movements at Central Queensland Airports This Week


During the early part of the week, there were some interesting and notable movements into some Central Queensland Airports.

JetGo Australia continues to operate fly-in fly-out charter flights to the region, with another flight from Brisbane to Barcaldine and return with their Embraer E-135 VH-JTG on Monday 21 May.  Interestingly, later during this week, VH-JTG ventured into Western New South Wales, finishing the week parked at Sydney. 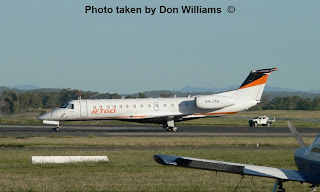 Dubbo-based AirLink Beech 1900D VH-RUE normally flys a Brisbane-Proserpine (Whitsunday Coast)-Brisbane FIFO charter every Monday night / Tuesday morning, however on Tuesday 22 May, VH-RUE was noted flying from Proserpine to Emerald and then on to Brisbane.  It will be interesting to see if this becomes a regular FIFO charter

Also popping into Proserpine (Whitsunday Coast) Airport was the Queensland Government Raytheon Hawker 850XP bizjet.  It was on the ground briefly on Tuesday 22 May.  VH-SGY was noted at Mackay Airport on Thursday 24 May.
Posted by Damian F at 8:00 AM