A Few From Gladstone Airport This Week

Despite a family emergency, Jamie C has still managed to not only capture some lovely images of some interesting aircraft that passed through Gladstone this week, but he also processed his images, and sent them through for publishing!

On Wednesday 23 May, Jamie managed to capture Aerospatiale/Eurocopter AS350.B helicopter P2-THS as it departed for Caloundra. The Papua New Guinea registered Squirrel chopper had earlier arrived from Mackay, and was also noted earlier in the week passing through Cairns. 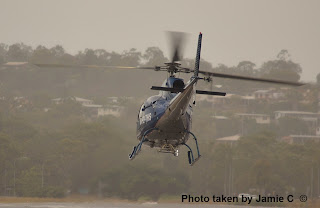 
Also on Wedneday 23 May, Jamie also capture a couple of spectacular images of a pair of QantasLink aircraft. QantasLink (Cobham Aviation-operated) Boeing B717-200 VH-NXQ was captured just after rotating from a wet Runway 10 bound for Brisbane.

On Thursday 24 May, Jamie noted that the upgraded apron lighting was well and truly being installed. 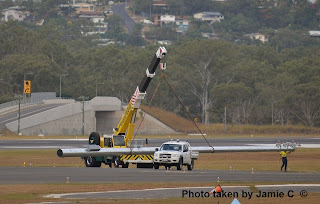 The daring workers not only dodging aircraft on the apron, but also being hoisted up in the air to install the light bulbs! Not for me! 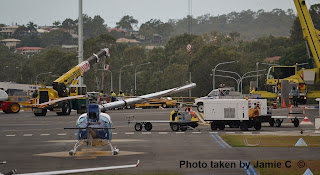 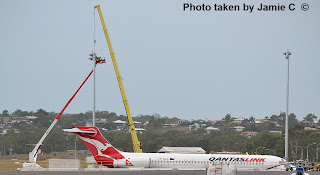 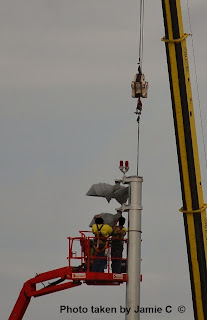 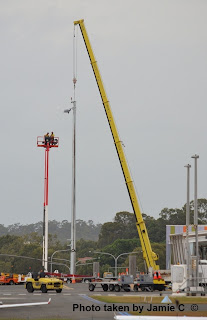 On the aircraft front, Jamie spotted pressurised Cessna P210 VH-NGD, as well as another pair of Aerospatiale AS350.B Squirrel choppers in the form of Australian Helicopters’ VH-HQO and Aeropower’s VH-SHD.

Both of these choppers are regular visitors to Central Queensland airports, and have featured in previous Blog posts.

Thanks Jamie for your wonderful photos – and all the best with impended delivery!!
Posted by Damian F at 10:18 AM