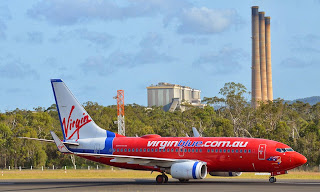 On Monday 6 January, another Boeing B737 jet touched down at Gladstone Airport in the form of Virgin Australia B737-700 VH-VBZ.

VH-VBZ touched down on a scheduled service from Brisbane early as VOZ1707.  It later departed back to Brisbane as VOZ1710.

UPDATE!  Thanks to local plane spotters Jamie C and Tash C for sending through these great photos from last week!