The Mackay Daily Mercury newspaper has recently reported that the Mackay community can be assured that regions two Tiger Moths are in tip-top condition, despite a fatal crash in the south.  Video footage recently captured the wing of a Tiger Moth snapping off during an aerobatic manoeuvre performed off the Gold Coast.  The plane crashed into the ocean, killing the pilot and passenger. 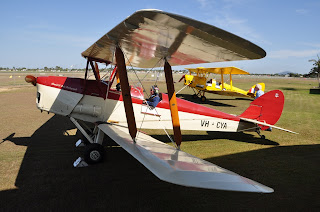 Both Mackay planes do not perform aerobatics and are utilised only for scenic joyflights over the region.  They are also inspected regularly.  When anyone asks about aerobatics, the Mackay Tiger Moth Museum refers customers to other aircraft in the area. 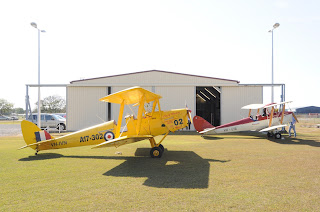 The museum operates their Tiger Moths out of Mackay Airport, in front of their new hangar beside the Mackay Aero Club, on Casey Avenue, Mackay.

20, 30, and 60 minute joyflights and gift vouchers are available  Bookings can be made through Whitsunday Office Machines on 4998 5677.

Full details are available on the museum's website - HERE.
Posted by Damian F at 8:36 PM