We've already posted below some stunning images from local plane spotter Jamie C of the terrific action at Gladstone Airport last Thursday 9 January as a fantastic pair of Fly-in Fly-out (FIFO) charter movements called in.  In this post, we feature some more fantastic photos of the action taken by Tash C. 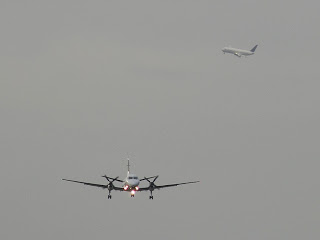 Regional Express (REX) SAAB 340B+ VH-ZLO touched down first at Gladstone, operating a FIFO flight from Brisbane on behalf of Pel Air as PFY9216.

VH-ZLO eventually departed back to Brisbane as PFY9817.

Soon after the SAAB touched down, Airwork New Zealand Boeing B737-400 ZK-JTQ touched down flying on behalf of Our Airline (Air Nauru), which operated the other FIFO charter into the industrial city as RON914 also from Brisbane.

Tash also captured the strange operational requirement of ZK-JTQ with a local Queensland Fire and Rescue Service (QFRS) fire engine on standby during its landing.  Also until recently, ZK-JTQ had been operating in West Australia by Alliance Airlines - hence the purple tail.

After staying for the night, ZK-JTQ departed back to Brisbane early on Friday 10 January as RON915.

Meanwhile, Tash also sends through some more photos from Gladstone Airport during the afternoon of Thursday 9 January, including Virgin Australia Regional Airlines (VARA) ATR 72-500 VH-FVU as it departed back to Brisbane as VOZ1720. 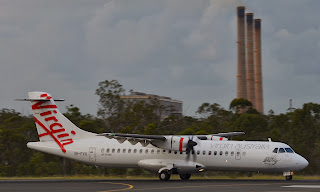 A sensational afternoon at Gladstone Airport, and some absolutely fantastic photos from Tash!

Sincere thanks to both Tash and Jamie for sending through their photos that have appeared on the CQ Plane Spotting Blog over the past couple of days!