With the start of the Queensland Rugby League (QRL) Intrust Super Cup over the weekend, the locally-based Mackay Cutters played host the Cairns-based Northern Pride.  Consequently, the Pride chartered Alliance Airlines to fly their players and officials into Mackay, with Fokker F-70 jet VH-JFE touching down at Mackay Airport from Cairns on Saturday 4 March as UTY3381. 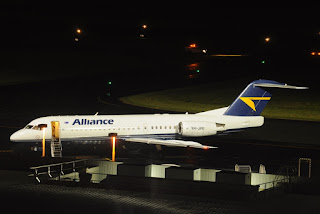 After the Northerners defeated to locals in what was reportedly a close game, VH-JFE departed Mackay Airport during a tropical rain storm later on Saturday 4 March.  It initially departed to Townsville before continuing a little later back to Cairns.  VH-JFE flew as UTY3382.

Meanwhile, JetGo Australia Airlines recently announced that they have gone into partnership with the Rockhampton Leagues Club Central Queensland Capras for the 2017 season.  With the airline already operating Regular Passenger Transport (RPT) flights into the beef capital, I would assume that this partnership may see extra charter flights over weekend transporting the Capras to and from their various playing venues.  It might also be an opportunity to finally see one of their two new Embraer ERJ-140LR (ERJ-135KL) aircraft - VH-ZJE and VH-ZJG.
Posted by Damian F at 9:02 AM