The second 'wave' of heavy jet passenger charter flights in support of the Singapore Armed Force's Exercise Wallaby 2017 resumed late on Monday 25 September with Singapore Airlines Boeing B777-200 9V-SQK calling into into Rockhampton Airport to bring another load of personnel and their bags, as well as return personnel home following their deployment to CQ. 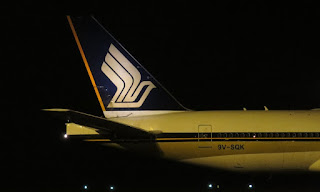 9V-SQK touched down at Rocky directly from Singapore's Changi Airport as SIA8933.

After unloading and then re-loading, it returned to Changi but as SIA8934.

At the time of writing, another Singapore Airlines B777-200 is scheduled to again arrive into Rockhampton Airport late on Tuesday 26 September with 9V-SRP listed on flight tracking websites as the aircraft to complete the flights.

All photos taken by Kayanne Hardsman  ©
Posted by Damian F at 8:16 AM