I recently spent a weekend at Mackay attending meetings but was able to spend a little bit of time at Mackay Airport – and I was particularly interested in capturing some photos of Mackay Airport’s most recent arrivals in the form of locally-operated Flyon Helicopters. 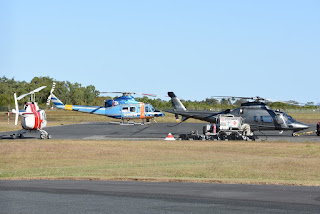 Flyon Helicopters has predominately operates Marine Pilot transfer flights for the compulsory area of Hydrographers Passage, off Mackay, 24 hours per day 7 days a week.  They also offer additional helicopter charter services from their Mackay Airport base including corporate and private charter, aerial filming and photography, mining support, including crew and employee transfers.  All Flyon activities are carried out under the AOC of Jayrow Helicopters.

Flyon Helicopters currently operates three Agusta A109E Power helicopters – VH-XUM, VH-RUA and VH-ZCF – with the latter recently delivered following a period of time operating for the RACQ LifeFlight Rescue Helicopter Service, specifically operating out of Bundaberg Airport as “Rescue 522”.  Bell 206 VH-DPS is also currently at Mackay Airport operating in what looks to be a 'back-up' role. 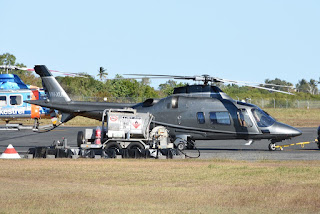 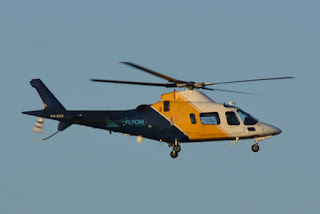 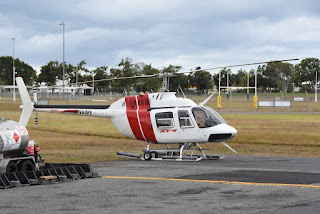 Much to my surprise, Flyon has also recently taken delivery of (former) Kestrel Aviation Bell 412 VH-KAC.  I spotted the helicopter undergoing a local test flight on Saturday 26 August around Mackay Airport.  It has since been noted competing transfer flights to Hay Point Coal Export Loading Point and to the Blossom Banks. 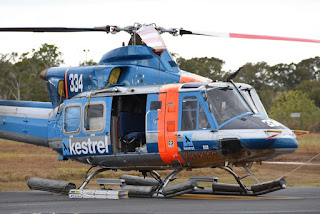 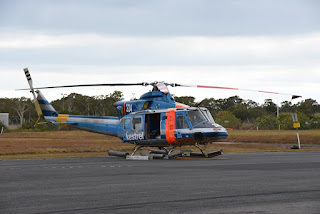 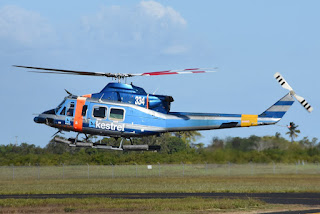 Check out Flyon Helicopters Facebook page for more information and some great photos of their helicopters in action - https://www.facebook.com/FlyonHelicopters/

Meanwhile, after I visited, on Sunday 27 August, Babcock Mission Critical Services Australasia (formerly Australian Helicopter) Bell 412EP VH-PXY ferried into Mackay Airport from Cairns and Townsville.  After overnighting, it continued to Gladstone Airport, the Sunshine Coast and Coffs Harbour on Monday 28 August where it looks to have headed for planned maintenance.

VH-PXY had previously been operating out of Horn Island in Far North Queensland as “Rescue 700”.

VH-VAU spent a large portion of this year operating out of Mackay Airport and then Rockhampton Airport with the locally-based CQ Rescue and Capricorn Helicopter Rescue services.
Posted by Damian F at 9:01 PM