It was interesting to note that during the afternoon on Wednesday 13 September, three aircraft all called into Rockhampton Airport from Cairns.

Perhaps the most notable was Regional Express (REX) SAAB 340B VH-ZRJ, which looked to position into Rocky from Cairns as RXA9907. 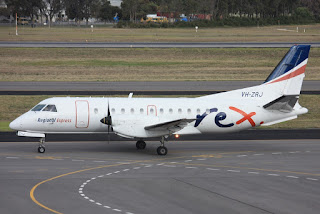 It was followed later in the day by a pair of Townsville Airlines (Flightech Air Logistics) Cessna 402C twins VH-UCM and VH-THX which also both flew in from Cairns.

All three aircraft stayed at Rockhampton Airport for the night and returned to Cairns early on Thursday 14 September. The REX SAAB VH-ZRJ was heard flying as RXA9508 and was heard to remark that Cairns was a fuel stop before it continued to Horn Island.

Meanwhile, a third Townsville Airlines (Flightech Air Logistics) aircraft in the form Beech B200 King Air VH-WZN also arrived into Rockhampton Airport in the wee small hours of Thursday 14 September. It arrived from Cairns and then joined VH-ZRJ and the two other Townsville Airlines aircraft -VH-UCM and VH-THX - in all departing back to Cairns.

Finally, a nice corporate light general Aviation (GA) aircraft to call into CQ this week was Pilatus PC-12/47E VH-FMM which was noted departing Longreach Airport for Barcaldine and then Melbourne (Avalon) Airport on Wednesday 13 September.  It looked to then continued from Avalon to Albury in New South Wales there to appears to be based.  VH-FMM originally flew into Longreach Airport on Monday 11 September at the end of big day of flying which saw it depart Albury for Avalon and then Adelaide before it returned to Avalon and flew up to Barcaldine and then Longreach.