On Wednesday 20 September, I ventured to Emerald with my lovely wife on our anniversary and as luck would have it, when I popped into Emerald Airport, there were four Australian Army NH Industries MRH-90 Multi-Role Helicopters parked on the apron preparing for departure. 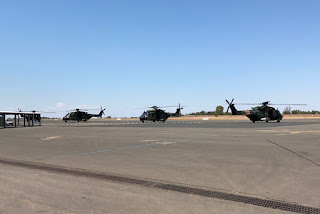 Sadly, I was only able to manage some photos on the phone as (of course) I didn't bring my camera with me!

All four had arrived a little while earlier from the South, flying under the one formation callsign of "Cowboy". 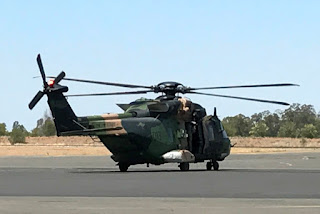 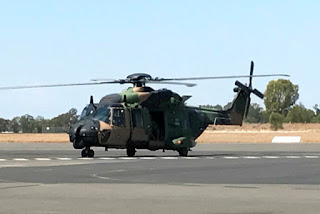 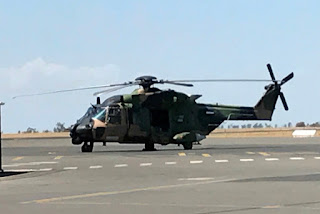 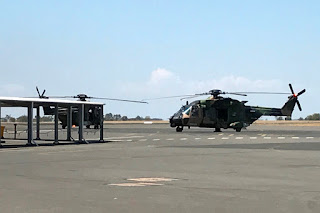 It's also worth noting that on Tuesday 19 September, another Australian Army MRH-90 A40-042 was noted departing Gladstone Airport for Townsville as "Warhorse 88".

Despite not having a good camera to take photos, it was still a nice sight and sound to see these military helicopters up close at Emerald Airport!

UPDATE!  Late on Wednesday 20 September, an unidentified MRH-90 flying as "Saxon 86" was heard to declare a "PAN" and made a forced landing at Hervey Bay (Fraser Coast) Airport following reports of multiple birdstrikes.  It seemed to depart ok a little later.

FURTHER UPDATE!  Then on Thursday 21 September, another unidentified MRH-90 flying as "Saxon 46" was heard to also land at Hervey Bay (Fraser Coast) Airport.

"Saxon" is the radio callsign of the School of Army Aviation at Oakey.
Posted by Damian F at 6:52 PM