Meanwhile, a little smaller that a bizjet but also arriving into Hamilton Island Airport on Friday 3 November were Piper PA-24-260 VH-TMZ which arrived from its Hervey Bay (Fraser Coast) Airport base, along with Mount Gambier (South Australia) based Cessna 182 VH-YZY which arrived from there via Charleville. 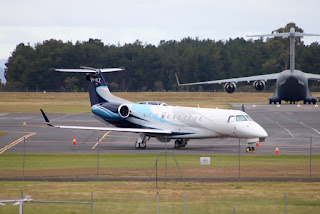 It departed to Hobart on Wednesday 1 November and was photographed (above) by Brisbane-based plane spotter Brendan B.

Photos taken by the FNQ Skies Blog and Brendan Berry  ©
Posted by Damian F at 6:35 PM