On Tuesday 28 November, Royal Australian Air Force (RAAF) Boeing B737-7ES / E-7A Wedgetail Airborne Early Warning & Control (AEW&C) aircraft A30-005 was noted completing a missed approach at Rockhampton Airport.  It flew up from the South and then continued further North to Townsville where it photographed below on finals to Townsville Airport. 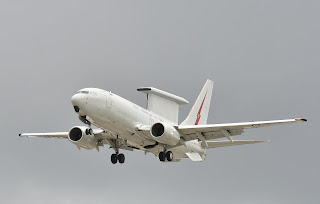 It is believed that the Wedgetail is currently participating in the RAAF's Exercise High Sierra which is currently underway around Townsville.

Meanwhile, also completing a missed approach at Rockhampton Airport but late on Monday 27 November was Australian Maritime Safety Authority (AMSA) (Cobham SAR Services Pty Ltd) Bombardier CL-600-2B16 Challenger 604 bizjet VH-XNE.  It flew South from and then later returned to Cairns where it is currently based.  VH-XNE was heard to use the radio callsign of "Rescue 330".