A sad incident we've been made aware of involving a familiar aircraft to Rockhampton Airport and CQ skies with a United States Navy (USN) Grumman C-2A Greyhound Carrier Onboard Delivery (COD) Aircraft crashing into the ocean South-East of Okinawa, Japan, on Wednesday 22 November. 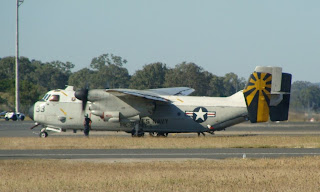 The aircraft involved has been identified as 162175 / NF-33 of the Fleet Logistics Support Squadron 30 (VRC-30 Detachment 5).  It was one of two Greyhounds that were frequent visitors to Rockhampton Airport during joint Military Exercise Talisman Saber 2013 - as pictured. 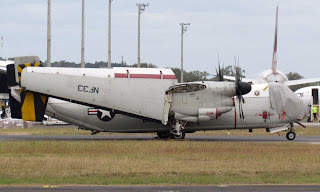 The Greyhound was reportedly enroute from Marine Corps Air Station Iwakuni (MCAS Iwakuni) in Japan to the US Navy carrier USS Ronald Reagan (CVN 76) carrying 11 crew and passengers.  Sources say the aircraft was 'on approach' when crashed into the ocean South-East of Okinawa.  Three people are missing. Eight people were rescued in good condition.

Our thoughts and prayers go to the victims and their families and friends.