On Wednesday 22 November, Qantas Boeing B737-800 VH-VZF was noted operating into Hamilton Island Airport on the scheduled QFA866/867 service from and back to Sydney. 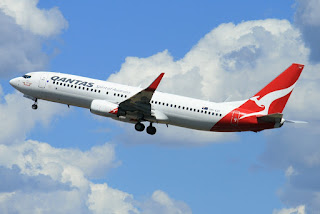 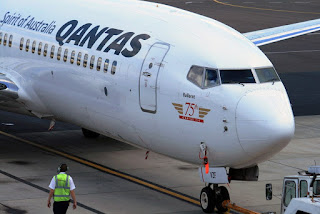 The B737-800 was originally ordered by Qantas back in 2009 and was registered VH-VZF in August of that year.  It was accepted by Qantas in early September 2009 and was the 162nd Boeing airliner delivered new to Qantas and the the 42nd Boeing B737 delivered new to Qantas.  VH-VZF also had a special '75th' logo and titles on the nose indicating that it was the 75th Boeing B737 to be delivered to the Australian Airlines / Qantas Airways group.

At that time too, VH-VZF also carried the New Zealand flag and 'ZQA' on the nosewheel doors.  Soon after its arrival into Melbourne, the aircraft entered the New Zealand aircraft register as ZK-ZQA during the middle part of September 2009 with Jetconnect Ltd in Auckland, New Zealand as the registered operator.  After then ferrying to Auckland Airport, ZK-ZQA was named 'Jean Batten' and then operated its first Qantas Jetconnect revenue service from Auckland to Brisbane as QFA116 on Thursday 17 September 2009.

ZK-ZQA operated its final service for Qantas Jetconnect this year on Wednesday 25 October when it arrived into Brisbane from Auckland as QFA124.  The aircraft was then cancelled from the New Zealand aircraft register and was then re-registered as VH-VZF, again with Qantas as the registered operator.  VH-VZF was also renamed 'Ballarat'.

After a test flight from and back to Brisbane, VH-VZF entered service with Qantas on Friday 10 November.  VH-VZF is pictured above at Adelaide Airport on Monday 20 November.

All photos taken by Tony Haynes  ©
Posted by Damian F at 7:47 AM