On Friday 10 November, Pacific Aerospace (PAC) 750XL ZK-KDN was noted arriving into Longreach Airport from the Gold Coast.  It had arrived at the Gold Coast directly from Hamilton (New Zealand) on Thursday 9 November. 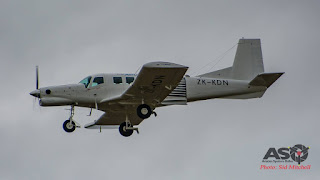 After reports that it had maintenance issues, ZK-KDN finally departed Longreach Airport for Darwin on Sunday 12 November.  It is pictured above making a late evening arrival into the 'top end'.

It is scheduled to depart Darwin early on Monday 13 November for Manado (Sam Ratulangi International Airport) in Indonesia.

Of interest, ZK-KDN is the fourth New Zealand built Pacific Aerospace (PAC) 750XL to pass through Longreach Airport over the last few weeks on delivery flights to different parts of Asia.  As reported below, on Thursday 2 November, PAC 750XL ZK-KDP passed through, while on Sunday 22 October, ZK-KDO and ZK-KEB passed through Longreach Airport flying together.  All aircraft had earlier arrived from the Gold Coast and then departed to Darwin.  They also all continued to Manado.