JetGo Australia's First Embraer ERJ-145LR Regional Jet N16999 (to be VH-JGR) Touches Down in Australia - And Another is due soon!

The first Embraer ERJ-145LR regional jet bound for JetGo Australia has arrived in Australia on completion of a week-long delivery flight from the United States of America (USA) via Alaska, Russia, Japan and Indonesia.  The ERJ-145LR still wears its American registration marking of N16999 which it operated for Continental Express (ExpressJet Airlines), which provides regional services to the major network carriers in the USA.  It has been repainted into JetGo Australia livery and will ultimately wear Australian registration VH-JGR when it enters service. 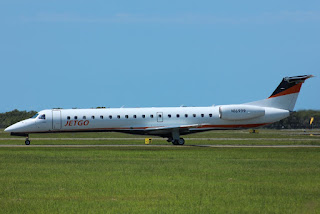 N16999 initially popped into Townsville Airport on Sunday 5 November on what appeared to be a diversion from Mopah International Airport, Merauke, Indonesia, while enroute to Brisbane.  After almost an hour on the ground, N16999 continued to Brisbane where it was photographed arriving by local plane spotter Lloyd F.  During the delivery flight it was noted using the rather appropriate flight number and callsign of JG145 ("JetGo 145").

VH-JGR / N16999 (cn 145307) is the first of (possibly) four 50-seat ERJ-145LRs due for delivery to JetGo.  Information suggests that a second aircraft - which has been identified as N14923 (cn 145318) which will wear the Australian registration marking of VH-JGK - is expected to arrive in Australia in December.