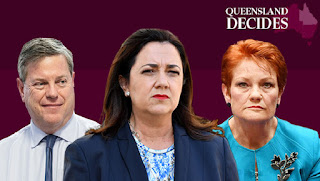 On Tuesday, the Queensland Government (State of Queensland) Raytheon Hawker 850XP bizjet VH-SGY departed Mackay Airport for Townsville and then Bundaberg Airport.  It later flew to Brisbane.  Meanwhile, the Queensland Government Raytheon B300 Super King Air VH-SGQ was noted transporting the Premier to various parts and was flew from Brisbane to Townsville before visiting Mackay, Rockhampton, Gladstone and Bundaberg Airports.

On Wednesday, VH-SGQ departed Bundy for Maryborough Airport and then Toowoomba.  It then flew to Brisbane.

As has been the case over the last couple of weeks, The Premier was joined in her travels by a pair of Super King Air turboprops – Easternwell Group Beech B300 Super King Air VH-EWQ and Austrek Aviation Beech B200 Super King Air VH-ZGD.  On Tuesday 21 November, both flew from Mackay Airport to Rockhampton, Gladstone and then Bundaberg Airports.  On Wednesday 22 November, both departed Bundy for Maryborough Airport before VH-EWQ flew to Brisbane while VH-ZGD flew to Toowoomba before later also flying to Brisbane.

It was also interesting to note that The Queensland Police Service (Airwing) Cessna 560 Citation Ultra bizjet VH-PSU flew into Bundaberg Airport on Tuesday 21 November.  It flew up from and then returned to Brisbane on what appeared to be only a training flight.  While the Queensland Police Service (Airwing) Raytheon B1900D VH-PSK was noted visiting several CQ Airports on Wednesday 22 November on what appeared to be one of its thrice-weekly prisoner transfer flights.

Finally, leader of the Liberal National Party of Queensland Tim Nicholls - plus support staff and media - continued to fly into parts of CQ on board Fly Corporate (Corporate Air) SAAB 340B+ (WT) VH-VEP.  On Wednesday 22 November, VH-VEP was noted arriving into Hervey Bay (Fraser Coast) Airport from Cairns and appeared to be staying for the night.
Posted by Damian F at 8:16 PM