As the Queensland State election campaign continues, Queensland Premier Annastacia Palaszczuk hit the hustings in Central Queensland and Fraser Coast seats on Thursday 2 November and her support aircraft were spotted at both Rockhampton and Bundaberg Airports. 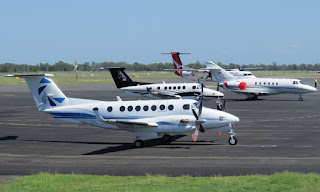 All three aircraft remained parked at Rockhampton Airport for the night and were photographed resting quietly on the Southern end of the parking apron early on Thursday 2 November.

A little later in the day, all three aircraft departed Rocky for Bundaberg Airport where were again photographed resting quietly on the parking apron. 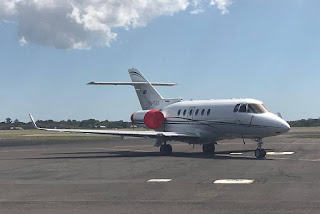 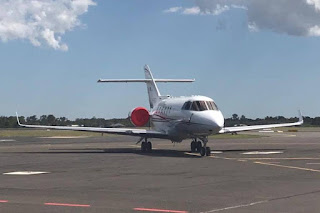 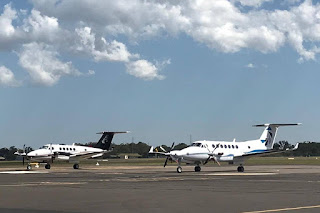 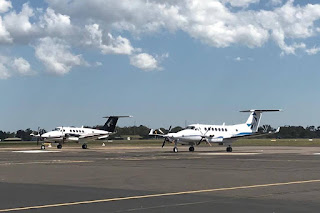 Flight tracking websites suggest that all three aircraft will depart Bundy early on Friday 3 November for Brisbane, perhaps seeing the end of the Premier's first foray into some parts of regional Queensland that could decide the forthcoming election.

Meanwhile, also on Thursday 2 November, it is believed that The Queensland Police Service (Airwing) Cessna 560 Citation Ultra bizjet VH-PSU ferried at least one Government Minister and other political and support staff from Brisbane to Proserpine (Whitsunday Coast) Airport and back.

And lastly, the State Opposition has 'finally' secured private air transport - they have been 'grounded' in Brisbane due to a lack of suitable available charter aircraft - with State leader Tim Nichols seen boarding Fly Corporate (Corporate Air) SAAB 340B+ (WT) VH-VEP at Brisbane Airport to transport him to Townsville where he made several policy announcements also on Thursday 2 November.

We would expect him to visit CQ at some point in the campaign and it will be interesting if he continues to utilise the SAAB.

Sincere thanks to Rockhampton plane spotter Kayanne H and Bundaberg plane spotter Dan B for both taking the time to capture and send through these great photos!

Photos taken by Kayanne Hardsman and Dan B  ©
Posted by Damian F at 10:24 PM