A little earlier in the day, also on Wednesday 5 September, another pair of Australian Defence Force (ADF) aircraft were also spotted visiting or completing airwork at Rockhampton Airport. 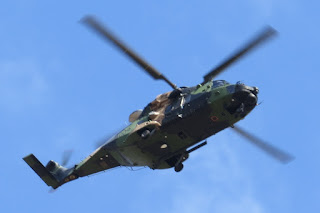 Australian Army NH Industries MRH-90 Multi-Role Helicopter A40-009 is pictured above arriving into Rocky from Brisbane as "Destrier 119".  After taking on fuel, it continued to Townsville.

Of interest, late on Tuesday 4 September, fellow MRH-90 A40-040 as "Destrier 127" completed airwork around the Whitsundays and Proserpine (Whitsunday Coast) Airport.  Another MRH-90 A40-021 was also noted flying South of Townsville but it is unclear what it actually ended up doing!

Meanwhile, Royal Australian Air Force (RAAF) Beech B350 Super King Air A32-426 "Beaufort 76" was noted completing a missed approach at Rockhampton Airport, looking to fly up from (or around) Tamworth and then continuing further North towards Mackay and then Townsville.

A32-426 "Beaufort 76" was also noted completing a missed approach at Rockhampton Airport on Tuesday 4 September with it coming down from the North and then flying onward to the Sunshine Coast.